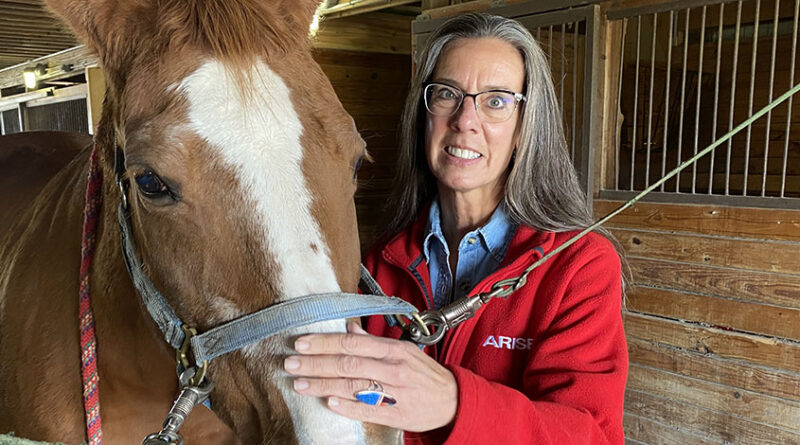 On a 77-acre working horse farm in Chittenango, the line that often separates children with disabilities from their peers has slowly been erased.

The farm is operated under the umbrella of the ARISE organization, an independent living center serving more than 7,000 individuals in Onondaga, Oswego, Cayuga, Madison and Seneca counties. The nonprofit agency provides a range of services and programs for those with developmental disabilities and other physical and mental health challenges.

ARISE at the Farm also offers several recreational opportunities, including therapeutic horseback riding, a sprawling inclusive playground and an accessible fishing pond available to both adults and children throughout Central New York.

At the helm of the ARISE agency is 56-year-old Tania Anderson, the mother of a teenager with a rare genetic disorder, who is also a lawyer, a former journalist and a long-distance runner with 30 marathons under her belt.

“People with disabilities should have equal access to all buildings, as well as education, employment and other services,” said Anderson, who has served as CEO of the organization since 2016. “That also includes equal access to having fun.”

The mission of offering recreational activities is a year-round one. During the winter months, the ARISE organization provides an adaptive winter sports program at Labrador Mountain in Truxton, just outside of Syracuse. Its program, ARISE & Ski, was one of the first adaptive winter activities in Central New York.

For those who want to express themselves through the arts, the ARISE organization publishes award-winning work submitted by those with disabilities in an annual magazine, titled Unique. The artwork, including paintings and sculptures, has been displayed in past years at the Everson Museum of Art, Syracuse.

At the horse farm, the agency constructed one of the earliest inclusive playgrounds in the area, offering adaptive equipment, such as specialized swings, right next to standard ones. Children of all abilities can also play on an elevated platform that can be reached by an accessible ramp.

“There is nothing more powerful than people with disabilities interacting alongside people without disabilities,” said Anderson, who knows firsthand the importance of inclusive programs that welcome everyone.

Her daughter, Eliza, has Wolf-Hirschhorn syndrome, a rare genetic disorder than occurs in one in every 50,000 births. It typically causes developmental delays because it makes it harder for children to learn and process information.

Anderson was actually serving on the board of directors for the ARISE organization before her daughter was born. “A lot of people don’t realize that I was involved before I had Eliza,” she said.

When Anderson suddenly found herself raising a child with a rare developmental disability in a world that does not always welcome differences, her involvement with the ARISE organization became even more personal. “Once Eliza came, I had even greater affinity for the agency’s mission,” Anderson said.

Eliza was enrolled in the therapeutic horseback riding program at age 3, and has been a big fan of the inclusive playground for years. For both adults and children, the horseback riding also incorporates other activities as well to help them in learning things such as numbers and letters.

“It helps to engage them in the riding lessons,” while they develop their physical and occupational motor skills as they gradually learn how to steer the horse, Anderson said.

The horse farm was donated to ARISE in 1998 by Jim Marshall, a retired veterinarian from Fayetteville. It has two arenas with accessible ramps that allow riders in a wheelchair to transfer themselves or be lifted onto the horse.

Eliza started receiving early intervention services shortly after her diagnosis at 13 months and it made a big difference in her progress, said her mother. She also received community habilitation services through ARISE, which focus on developing independent living skills within the home and the community.

“She is a really hard worker,” said Anderson. Eliza often exceeded the developmental expectations of health care providers, and “proved them wrong” on several occasions when they believed she couldn’t accomplish something, said her mother.

Eliza is now 17 years old, a high school student learning in a fully inclusive classroom setting. She will probably benefit from the employment services offered through ARISE when she is older, Anderson said.

Anderson embraced parenthood and the challenges of raising a child with a rare disorder in the best of ways. After the birth of her daughter, she eventually applied for the CEO position at ARISE when the previous CEO had retired. She not only stepped into a new and fulfilling career, but she brought along a strong passion for advocating to provide needed services for clients and families.

Most of her legal career was in the court systems, working as a law clerk for the New York State Supreme Court and for the federal trial and appellate courts. She also spent a year practicing communications law for a Washington, D.C. firm.

Anderson still has her law license and serves as in-house counsel for ARISE. Anderson’s previous advocacy work as a lawyer has proved beneficial when clients are having trouble obtaining needed services that are guaranteed by law.

It’s estimated one in five people have some type of physical or mental disability, which may be an invisible one, Anderson said. “We’re constantly educating people and trying to take the fear out of it,” she said.

ARISE at the Farm is supported by donations and fundraisers and has built a strong reputation as a “safe and fun place” for those with disabilities. “People are accepted and accommodated for whom they are,” Anderson said. “At the farm, children are able to have a fun and good experience and the parents know they’re safe.”

The agency’s recreational programs often serve as a “gateway” for families to learn more about other services available to them through ARISE. These include school-based and outpatient mental health services, employment, community habilitation, respite programs and independent living skills training.

For more information about ARISE or to learn how to support the farm program, visit www.ariseinc.org