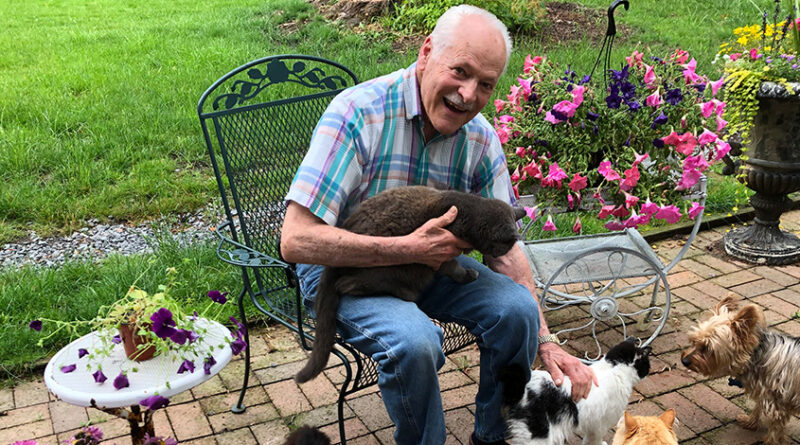 Owners David Neibert, 80, and wife Ann, 77, have been running their post-retirement business in Skaneateles for 12 years

Business owner David Neibert is one of those guys who retired with no plans of what to do afterward.

He eventually found his calling. He and his wife, Ann, currently own and run Aristocats and Dogs, a pet supply store in downtown Skaneateles.

“I just love dealing with pet people,” he said. “They’re always so happy. Many bring their dogs in and we give them treats. We’ve had everything in here from a 2-pound Yorkie-poo to a 210-pound English mastiff.”

For more than 35 years, Dave and Ann, both former teachers, had owned and run a ServPro franchise, which served Syracuse and the greater Onondaga County area. The business specialized in cleaning up water, fire and smoke damage for commercial and residential clients. At its peak, the company had six other employees, including a secretary, a salesman and four technicians. David ran the business; Ann was the bookkeeper.

For the next two years, the Skaneateles couple kicked back. David said he got bored.

“I got tired of just sitting around, reading the paper, drinking coffee and watching TV. I like to golf, but you can’t do that every day. And there’s just so many times a week you can mow the lawn,” he said.

So when Aristocats and Dogs on Genesee Street went up for sale, David and Ann decided to buy it. “We only live a block and half from the store. We’re animal people so I said, ‘What the heck?’” he explained.

Twelve years later, David, 80, and Ann, 77, are still happily running their post-retirement business. The store is open seven days a week and is closed only on Thanksgiving, Christmas, New Years Day and Easter. David is at the store five to six days a week; Ann covers things the other days.

Ann said her husband “just loves” being in his own business.

“For Dave, this store is very much about the socialization he gets with the customers coming in. It gives him an opportunity to use his experience, keeps his mental skills sharp and keeps him physically active. He’s always been a good people person,” she said.

Apart from the store, Dave said he plays golf once a week in a league. Ann is civic chairperson of the local garden club and oversees the hanging up and maintenance of the hanging flower baskets throughout the village each year, in addition to the maintenance of the shrubs and flowers in front of and behind the Skaneateles Library. She is also an active member of a 100-year-old book club, which has 27 members and meets twice a month. The Neiberts are also members of the Skaneateles United Methodist Church.

As for the store, there’s more to pet supplies and pet food than meets the eye, the couple said.

“People will ask such things as ‘What’s the best collar for a golden retriever?’” Ann said. “You’d think every golden retriever would be similar. They’re not. So, if you haven’t measured your dog’s neck beforehand, I can’t tell you what size collar to get. I can only make a suggestion.”

Customers have numerous food and treat requests for their pets, Ann added. There are hard chews, soft chews.

“Some customers ask for grain-free items. Or organic. Or they say my dog can only eat chicken, or fish or is allergic to most things. Recently a fellow was in here and wanted to know if we had any venison treats. Now isn’t that a strange one?” she said.

The most popular cat item? Hands down, the Finger Lakes catnip snakes and small pillows, he added.

“A local lady grows the catnip and makes them,” he said. “The best way I can describe catnip is that it’s like marijuana for cats. They’re attracted to it and it makes them wild and crazy, a little bit. They lick and chew on these items, toss them around and play with them.”

Pet supplies at the store include numerous collars and leashes; a host of dog and cat food and treats; clothing (jackets, sweaters, booties); life jackets—even Doggles, a pair of sunglasses that strap to your dog’s head.

“They’re popular with pet owners who have boats or who let their dogs ride with them on motorcycle side carts,” David said. “They protect a dog’s eyes from the sun and bugs from hitting them in the face and eyes.”

The store also has a machine that allows the customer to engrave a small, metal tag that can be attached to their pet’s collar with identification and contact information on both sides.

The couple has owned both dogs and cats for years. Currently, they have two small dogs (Shon, a shih tzu-bichon frise; and Buster, a silky terrier), and four cats (Charlie, Rusty, Pepper and Smokey). All the cats are strays that they’ve adopted and had neutered.

David describes himself as more of a cat person. “Yes, I have my dogs, but I like my kitties. They’re just so affectionate, very loving. They like to be petted and held. To get their bellies rubbed. At least mine do,” he said.

Ann said that David has converted a carriage house behind their home into bedding area for their cats and other strays. She said Dave grew up in Ohio and his family had a reputation of being cat people, often taking in strays. She described her husband as being a sort of “cat whisperer.”

“Maybe it’s his voice, his disposition, his gentleness. I don’t know what it is, but the cats just love him,” she said. “Weather permitting, during the morning he’ll put on his bathrobe and slippers, along with a coat and take the dogs for a short walk and the four cats will follow him. Everyone on the street laughs at that.”

“I tell them, if you like what you’re doing, stay with it and see if you can cut back, take on less. Relieve the stress,” he said. “If that isn’t possible, retire and find something that gives your life meaning, a purpose. Something you enjoy. Something that makes you want to get up in the morning. Volunteer at the church, food pantry, Meals on Wheels. You just can’t do nothing.”