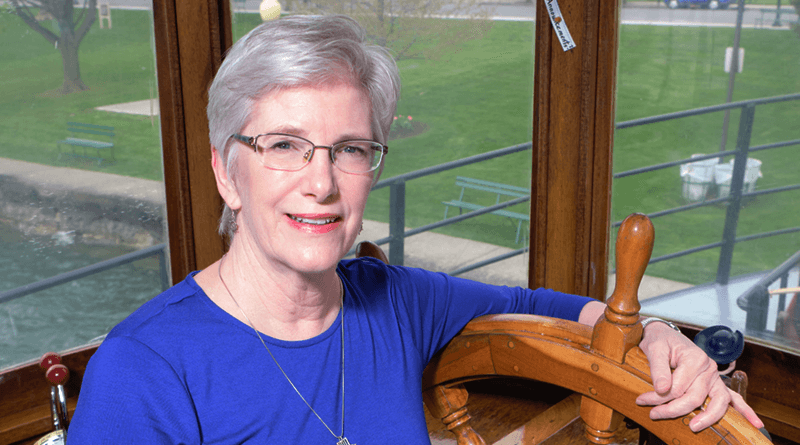 She is a great-granddaughter of Gustav Stickley and a daughter of Harriett and Peter Wiles.

Peter Wiles founded Mid-Lakes Navigation Co. on Skaneateles Lake more than 50 years ago, and Stickley was an iconic furniture designer and entrepreneur.

And because of these family connections to the region, she is trying to preserve their legacies both on water and land.

“It’s a great honor,” she said, and one that has provided an opportunity to learn more about her family history.

She, along with her younger siblings, are continuing to operate the Mid-Lakes Navigation tour boat business, which their father, Peter Wiles Sr., founded in 1968.

With only a few weeks until the Wiles open for their 51st season, Sarah and her two brothers and a sister — Peter Jr., Hattie and Dan — gathered in the Mid-Lakes offices on Jordan Street in the village of Skaneateles to discuss the business and their family.

Another sister and Hattie’s twin — Libby — retired from the business a few years ago. Sarah, Peter, Hattie and Dan are all equal owners of the family business.

While Sarah Wiles, 65, oversees marketing, advertising, and public relations, Peter Jr. handles the business and financial aspects. Hattie is the captain and manages the day-to-day operations on the lake, and Dan describes himself as the “utility infielder,” a baseball term referring to the guy that can play any position.

The Mid-Lakes fleet consists of the Judge Ben Wiles, in honor of their grandfather, who was a judge in Syracuse in the 1930s, and the Barbara S. Wiles, which is named for their grandmother and has served as a cruise boat and mail boat on Skaneateles Lake for decades.

Mid-Lakes Navigation also runs a full-service marina on the Erie Canal in Macedon, near Rochester.

Out of that business they operate several traditionally designed canal boats that people can rent and live onboard for several nights or longer.  Each boat is complete with a galley, sleeping accommodations and bathroom.

While the operation might be considered seasonal, with the Skaneateles tours running from mid-May to the end of September and the packet boat rentals wrapping up at the end of October, it is a year-round enterprise.

In the winter and early spring, there’s maintenance of the fleet and planning and strategizing for the following year.

Working in a family business can be tricky, but Wiles has described it as “awesome.”

“I think family businesses are notorious for infighting and things that don’t necessarily go well. But for all this time, and I think I’ll credit Dad with this, we’ve always been able to see our way through to a consensus in just about every single big decision that we ever encounter,” she said.

She describes herself as a gregarious person who enjoys talking with people. That is a good thing since the tour boats hosted an estimated 25,000 guests last season alone.

There is no secret to the success of Mid-Lakes, according to Wiles.

“My dad always had a great deal of respect for the people who worked for him. He’s given us all of these insights and gifts — being part of the community and partnering with other businesses. Tourism is a very cool business. It’s fun, and it relies on the cooperation of everyone involved,” she said.

Like her father, Wiles too has immersed herself in Skaneateles and the Finger Lakes area and has been part of the community for years. The family moved to Skaneateles from DeWitt. Wiles graduated from Skaneateles High School and she lives south of the village.

She’s co-chairwoman of the Antique and Classic Boat Show Committee, which holds its show in Skaneateles at the end of July. She has also served on the board of the Finger Lakes Tourism Alliance and been an active part of the Skaneateles Area Chamber of Commerce.

Hilary Fenner, who has been executive director of the chamber for seven months, has found Wiles to be a good “go-to person.”

“If I have any questions, especially being new here, I use her as a resource. She’s been on so many different boards and so active in our community and our chamber community. She’s a wonderful resource for me,” Fenner said.

Her brother, Peter Wiles Jr., said she puts her own personal strengths and her passions into whatever she’s doing, whether it’s marketing, serving on the board at Stickley House or driving the boat show committee.

One of those activities is as vice president of the Gustav Stickley House Foundation, which is working to restore the structure at 438 Columbus Ave. in Syracuse. It was the Stickley home in the early 1900s, and would later be her grandparents’ and her father’s home.

A fire on Christmas Eve 1901 damaged the home, but it provided Stickley with the opportunity to remodel in the interior in the Craftsman style, which was the first of its kind.

Because Stickley is considered a leader of the American Craftsman style and the Arts and Crafts Movement, it makes the home even more significant.

It’s important from a historical preservation aspect because it’s the first Craftsman interior in the United States, and it’s the start of the 20th century trend of open floor plans, said Beth Crawford, senior associate of Crawford and Stearns, architects for the project.

“He designed the interior to follow his philosophy of design,” Wiles added. He believed, she continued, that it would make people’s lives better with having family all together in one space, so they could see and talk to each other.

Stickley would sell the home in the early 1900s, and engage in some enterprises downstate and in New Jersey. But after a few years, those failed, and he was forced to file for bankruptcy.

Eventually, he would return to Syracuse.  Meanwhile, one of Stickley’s daughters, Barbara, married Ben Wiles, and the couple bought the Columbus Avenue house back.

They would raise their family there, including their son, Peter, Sarah’s father.

A while after his wife Eda died, Stickley moved in with the Wiles family, and lived with them on and off, until he died in 1942. The Wiles would sell the house in the mid-1950s.

Since then, the house has gone through several owners and transformations. But in 2016, the house was donated to the University Neighborhood Preservation Association, and work to restore it began.

The foundation was established and Crawford approached Wiles to be part of the project. Wiles attended an early planning meeting and has been on board ever since, keeping the other family members updated of the work of the foundation, Crawford said.

She is one of a few members of the Stickley family on the board, with others contributing materials and other resources.

Wiles brings a distinctive perspective to the project, Crawford noted.

“As a Gustav Stickley descendant, Sarah Stickley Wiles has a unique and special connection to the house as both her father and grandmother grew up in the house,” Crawford said. “While it is the Stickley homestead with many family memories, it is also a quintessentially important piece of American architectural history.”

The foundation completed phase 1 of the project in June of 2018, which involved the restoration of the structure’s exterior.

It is now fundraising for phase 2, which will focus on the house’s interior. The target date for the completion of the second phase is 2021.

One of Stickley’s pieces from the homestead was a sideboard, which Peter Wiles Sr. came to possess. It had become part of the furnishings at the Mid-Lakes Country Club, a golf course and restaurant that Wiles Sr. owned in Borodino on the east side of Skaneateles Lake.

Although Wiles Sr. had an appreciation for the sideboard, he didn’t have a use for it, his daughter said. It was among several pieces auctioned off in the late 1980s, but it was the one that garnered the most attention when the legendary Barbra Streisand purchased it for $363,000.

Monies from the sale would reportedly allow Wiles Sr. to further the boat-making business.

Wiles sees similarities between her father and great-grandfather. Not only were they both entrepreneurs but their work influenced wide audiences.

While Stickley helped to inspire the Arts and Crafts Movement, his grandson’s work in Skaneateles and his efforts in promoting the Erie Canal as the treasure it is, Wiles said, helped to enhance community and economic development.

In the late 1960s, while running the country club, the gentleman who had been operating the mail boat on the lake approached Wiles Sr.

He wanted to retire and suggested that Wiles take over the operation.

Wiles bought the boat, which could hold 25 passengers, and secured the mail contract. About a year later, one of Wiles’ employees had the idea to utilize the boat more by preparing food at the club’s restaurant and serving it to people on the boat.

Making sense of it all

Sarah Wiles has been working at the Mid-Lakes boat company on and off since she was 14 years old, with occasional pauses, as one of her brothers jokingly called them.

One “pause” came when she was 16, and she and her best friend in high school traveled to Europe. After graduating from high school, she did a cross-country trip. She attended St. Lawrence University, where she earned a degree in French, and she spent her junior year in college living abroad in an area north of Paris.

After college, she moved to Boston for a year and volunteered at the New England Aquarium.

“I pinpoint the aquarium as kind of a turning point just because it shifted me from the French and from the work that I’d been doing into this curiosity about living systems,” she said. “I’ve always been a broad-focused person. I like to bring things together and make connections. The study of biology spoke to that part of me — the theory of evolutionary biology and how animals evolved to do what they do.”

She returned to Central New York and volunteered at the Rosamond Gifford Zoo at Burnet Park and at the Montezuma National Wildlife Refuge. She would return to school, getting an undergraduate degree and ultimately a Ph.D. in evolutionary biology from SUNY College of Environmental Science and Forestry in Syracuse.

In the mid-1980s, she married Jim Ehmann, a science writer and one-time columnist with The Syracuse Post-Standard. The couple was separated when Ehmann died in 2000.

With a wide range of interests and a wider range of life experiences, there are still things on her bucket list, and when asked what those might be, she simply replied, “Everything. I want to see everything. My other bucket list thing is I want to compete on a high level of ballroom dance and I’m working toward that. I don’t know if I’ll get there.”

She and her companion, John Yuhas, had been talking about taking dancing lessons, she said, but then Yuhas was diagnosed with ALS and died in 2010.

Awhile after his passing, she saw a coupon for the Fred Astaire Dance Studio and she talked herself into attending.

Wiles told a reporter in a regional newspaper a few years ago, that through her endeavors, education and travel, she’s learned a lot that has helped in her daily experiences.

When asked, for this article, to expound on that, she said, “I think that’s what life is for.”

With a nod to her brothers and sister, she added, “This business and working with these guys, that’s especially important I think, and the business has taught me about working with people, cooperating with people, understanding people, and about how the real world works, you might say. What it takes to have a successful business and all the characteristics that make for a successful business make for success in other interactions.”