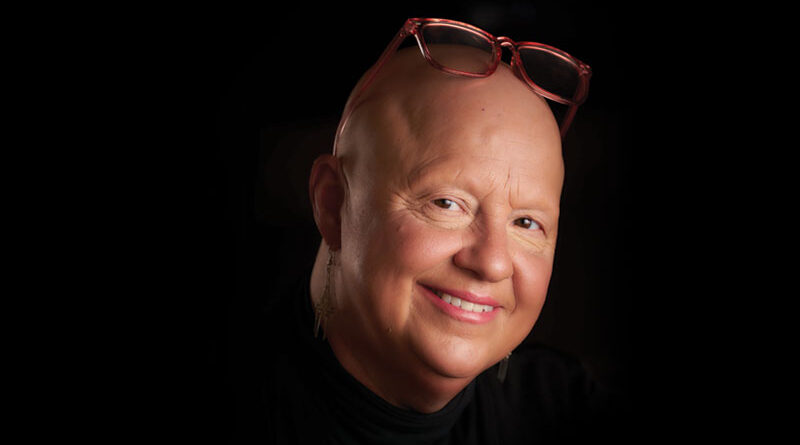 Alopecia, the autoimmune disorder that causes hair loss, has been in the news lately. Tracy Chamberlain Higginbotham, a business owner and a well-known advocate and supporter of women, has been coping with it for nearly 30 years. She’s been totally bald since 2018. She shares her story.

Tracy Chamberlain Higginbotham woke up March 28 to learn that the condition that caused her to lose her hair — eyelashes, eyebrows and thick, brown shoulder-length mane — was having a moment in the media spotlight.

The previous evening at the Oscars, actor Will Smith bounded on stage and slapped comedian Chris Rock, who moments earlier made a joke about Smith’s wife, Jada Pinkett Smith, and her nearly bald head. “Jada, I love you. ‘G.I. Jane 2,’ can’t wait to see it,” Rock quipped. The joke was a reference to the 1997 film “G.I. Jane,” which starred a buff Demi Moore with a buzz cut.

Pinkett Smith has been open about her diagnosis of alopecia (pronounced al-oh-PEE-she-uh), an autoimmune disorder that causes varying degrees of hair loss in people of all ages, races and ethnicities.

Higginbotham has universal alopecia and the complete loss of hair that comes with it, so she can sympathize with the celebrity, and anyone else who has the condition.

Higginbotham, 57, seized the moment to put thoughts into words and words into action. She sat down to offer a commentary on YouTube and dashed off a letter to the editor of The Post-Standard.

“What most people don’t understand about living a life of alopecia, especially as a woman and one who has been in the public eye or continues to be, is how vulnerable we feel trying to ‘fake it until we make it’ internally and accept our physical health condition mentally,’’ Higginbotham wrote. … “I hope the lesson that resonates from this national attention is the sense that people must be more kind to people who appear different. Period. We never know the story underneath what we see with anyone.’’

Higginbotham’s story is one of not letting alopecia define her. It’s one of coping with change and loss head-on and accepting it, while still having hope. “I believe in my heart my hair will come back at some point,’’ she said.

At her core, Higginbotham is a passionate advocate and supporter of women, known widely through her business, Women TIES (Together Inspiring Entrepreneurial Success). She’s also a wife, mother, event planner, author and athlete.

She wears many hats, both figuratively and literally. She has a real-hair wig and puts it on when occasions call for it, like business and networking events. But on days when she feels like a “badass bald woman,’’ she goes natural, often with a bright pink cap and a swipe of pink lipstick.

She has hats for all seasons and several reasons. She wears them to protect herself from the elements and feel more feminine and less vulnerable. People have mistaken her for a man, she said, or approached her to offer a hug, thinking she has cancer.

“It really does feel like you’re naked,’’ Higginbotham said of stepping out uncovered. “That’s the best way to describe it. I don’t show my bald head to many people.’’

Higginbotham reminds herself and others that there are worse problems to have than alopecia, that beauty radiates from the inside and that every day is something to be grateful for. Her days are full —and full of positive, life-reinforcing activities.

At home near Camillus, she checks the weather each morning to determine her daily workout or workouts. If it’s nice out, she might go for a run or put her bicycle in the car and pedal around Onondaga Lake. If it’s raining, she might start her day with some writing, usually in the form of an inspirational post for her Women TIES blog (https://womenties.blog).

The mission of Women TIES is to bring women together to support and learn from each other, inspire each other to reach higher levels of business success and eradicate pay inequality.

Higginbotham didn’t set out to be an entrepreneur, even though it’s in her blood. She grew up in Rome, in a large, blended family (her parents owned a ski shop and divorced when she was in grade school). She graduated from Rome Free Academy and continued her education at SUNY Oswego, earning a bachelor’s degree in business. That’s also where she met her husband, Scott.

She worked in the corporate and collegiate worlds for a time, including several years as assistant to the executive director at SUNY Oswego Alumni Association and later as assistant alumni director at Le Moyne College. At Le Moyne, Higginbotham honed her skills in event planning, assisting in the organization of on-campus, regional and nationwide events for alumni, parents and supporters of the college.

She launched Five Star Events in 1995 and ran the event planning and management company while at home raising her sons, Thomas and Adam.

One summer, she recalled, she attended a high school reunion in her hometown. Standing in a circle, she listened to her classmates describe what they do for a living. When it came her turn, she said she worked in event planning. “I felt so insignificant,’’ Higginbotham recalls. “I just didn’t feel like I had purpose.’’

She started channeling her “feminine purpose’’ to bring women together to market and promote themselves and lift each other up by doing business with each other. In 2005, Women TIES was born. Seventeen years later, Higginbotham reminds people that women still don’t earn as much money as men. One of her mottos: The world won’t change for women unless women change the world for women.

In time, Women TIES expanded across the state, serving hundreds of members and hosting member events in Oswego, Ithaca, Utica-Rome, Rochester and other markets.

A. Christina Breen-Hale, an independent insurance agent for State Farm, remembers attending a Women TIES event at Eastview Mall near Rochester about 15 years ago and being thrilled to win a one-year membership. She has been a member ever since. She likes Women TIES because she’s a social person and events and meetings are opportunities to network and potentially meet new clients.

“Tracy has put on a lot of programs over the years and they have helped me grow personally and professionally,’’ Breen-Hale said. “During shutdown, Tracy continued her programs on Zoom and we all networked there. She keeps her members engaged. She’s always promoting her members and making sure she gives value to them.’’

In-person events have resumed on a small scale, and Women TIES, along with other membership-based businesses and organizations, is evolving. Higginbotham has told members she is giving thought to semi-retirement and taking time to focus on other projects.

“I’m glad I’ve been a — I don’t know if pioneer is the right word — a representative for women entrepreneurs,’’ she said. “All things come to an end in some sense. I’m slowing down with Women TIES. But my voice for supporting women and business and equality will continue.’’

Alopecia isn’t life-threatening, but it is life-changing, Higginbotham said. It caused her to lose her identity and eroded some of her confidence, especially in the professional and public speaking realm. It took a long time to get used to seeing a different reflection in the mirror.

“I think it’s about accepting a new you,’’ Higginbotham explained. “It took me three years to figure out, slowly, that this is the new me. If the ‘pivot’ in my life is I’m supposed to speak about beauty or acceptance of self, I’m willing to share my story. Alopecia has altered the way I go forward in life.’’

After losing her hair, Higginbotham “escaped’’ into sports and found peace there. And new determination.

She had already created the Women’s Athletic Network, a division of Women TIES that brings together women entrepreneurs who are interested in sports and adventure. She has a “new life goal’’ of trying every sport at least once and invites other women along for the ride. She plans to try curling and parasailing this summer and recently accompanied a group of daring women to ROC City Circus in Rochester, where they climbed a long ladder to a small platform and experienced the exhilaration of soaring on the flying trapeze.

“I’m saving skydiving for the last sport just in case,’’ Higginbotham said with a laugh.

“When you’re doing sports, no one cares if your hair is perfect and your makeup is perfect,’’ she added.

Tracy Chamberlain Higginbotham’s early experience with alopecia was sporadic. In the beginning, more than 30 years ago, she started to notice small, coin-sized areas of hair loss on her scalp. Usually, the hair would grow back. Then she would lose an eyebrow or her eyelashes — and again lose hair on her head. She eventually was diagnosed with alopecia and would undergo hundreds of steroid injections to the scalp to encourage regrowth. In 2018, she lost all her hair.

An estimated 6.8 million people in this country have some form of alopecia. The autoimmune disorder affects everyone differently and there is no known cure. More information is available from the National Alopecia Areata Foundation: www.naaf.org

Higginbotham was thrilled when Stanley was named the 10th president of her alma mater, SUNY Oswego, in 1997. Stanley was Higginbotham’s business law instructor in 1984 and became one of her mentors.

King is one of the greatest tennis players of all time, and a champion for social justice and equality. Higginbotham met King at the Women’s Sports Foundation in New York City in 2018, where Higginbotham was invited to mentor upcoming female athletes entering the business world.

“I love how Oprah has been so inspirational and especially the fact she came from nothing,’’ Higginbotham said. “She has helped so many people.’’ Fun fact: Higginbotham appeared on “Oprah’’ in 1998, via video.

The co-founder of Ms. Magazine is a trailblazer who has been heralded as the “Mother of Feminism.’’ “I love women who have fought for equal rights,’’ Higginbotham said. A favorite Steinem quote is: “Women may be the one group that grows more radical with age.” Fun fact: Higginbotham took 120 women to the Women’s March on DC in 2017.

The late feminist attorney (and onetime president of the National Organization for Women) was a fierce advocate for women’s rights and gender equality. “She invited me to her house for a potluck dinner to speak about Women TIES,’’ Higginbotham recalled. “It was an honor to be in her presence.’’