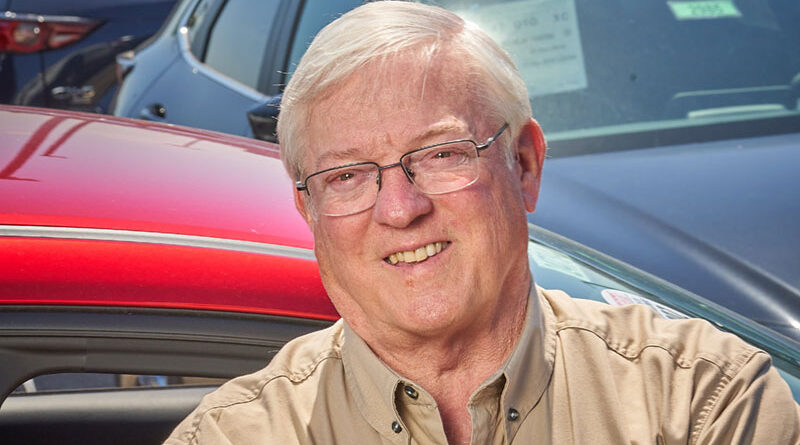 Way before the massive auto mall with 16 brands featured under one roof, it was all about finding the right fit at Roger’s Slacks Shack.

The owner carried Wranglers, but not Jeeps. He also had Levis, Lees and corduroys.

The pants shop was located in North Syracuse from 1971 until 1974. It evolved into one of the largest and most unique business ventures Central New York has ever seen.

“I loved selling jeans,” Roger Burdick recalled, “and we did well. But no, at that point I didn’t imagine any of this.”

The 72-year-old president of Driver’s Village in Cicero recently talked about his Central New York upbringing, the events leading to his success, and his desires to give back to the community that has been so kind to him.

Burdick’s grandfather, Grant Burdick, ran a service station in the 1930s. His dad, Glenn, started selling cars in the 1940s. Beyond his fondness for the garage, Roger Burdick did not develop an early passion for the front end of the automobile business.

But the idea grew on him. With money from the pants store, he was able fix up a few used cars and resell them in front of his shop. In 1980, Burdick tore down the slacks shack building to make room for his first dealership. He and his wife, Shirley, lived in a mobile home at the time.

Forty years later, Burdick is gradually handing over more responsibilities to his son, Bryan, as he takes more time off to hunt, travel and entertain his grandchildren. He envisions retiring within three years. “I’m not anxious to retire, but I know I can’t stop time,” he said.

Still, the automobile giant and devout evangelical Christian remains ambitious yet humble, noting that, “you cannot out-give God.” He plans to continue his philanthropy and help fulfill the needs of the Syracuse community through his continued work with the Burdick Foundation and other initiatives.

Outside of school and church, Roger, a 1966 graduate of North Syracuse High School, spent his time building and flying model airplanes. He moved on to go-karts and then automobiles. His first car was a rebuilt 1956 Chevy.

“I was everybody’s friend in high school,” Burdick said, “because I could fix their cars.”

In the late 1970s, Honda, Toyota and Datsun were still considered upstarts. Burdick said Mazdas were considered “pocket rockets” compared to the economy types of their fellow Japanese rivals. When the U.S. Environmental Protection Agency publicized that Mazdas got only 13 miles to the gallon, sales took a nosedive, prompting the Romano dealership to dump its Syracuse Mazda franchise.

Burdick, eager to take chances, welcomed the brand to his North Syracuse lot and opened his first new car dealership.

“What looked bleak turned out very strong,” he said. “I guessed I’m wired that way. I’m not necessarily proud to call myself a risk-taker, but I can say that at least these were careful decisions and calculated risks.”

Mazda introduced the GLC, a compact automobile with a four-cylinder engine that could compete with Honda and Toyotas in price, efficiency and performance. Sales at Burdick Mazda were very strong and led to continued expansion despite the erosion of U.S. automobile sales.

In 2001, Burdick bought the Penn Can Mall and converted the property into a massive indoor mega auto center.

“I bought it very inexpensively,” he recalled. “I knew that by consolidating, it would save money over time. It was a stronger marketing equation and a different experience for consumers.”

Burdick’s brothers David and Jonathan played major roles in the growing enterprise and have owned and run dealerships on the 92-acre property, along with Roger’s nephew Kevin Burdick and niece Kelly Burdick Pelcher.

Today, the Driver’s Village Auto Mall is the only business of its kind in New York state. The mega center has dealerships for Audi, Volkswagen, Hyundai, Mazda, Porsche, Lincoln, Mitsubishi, Nissan, Dodge/Ram, Chrysler, Jeep, GMC, Buick, Chevrolet, Kia and Fiat. It’s unique in that the salespersons are authorized to work with customers at any and all of the dealerships in that building.

“They can follow you from brand to brand if you want them to,” Burdick said.

The BMW, Toyota, Scion and Lexus are located in a smaller building behind the mall, and there is also a Burdick Ford dealership up the road in Central Square. These are owned by the family of Roger’s brother, David.

Burdick said his sales people and product specialists do not work on commission. Rather, they are paid a weekly salary and are evaluated each quarter for bonuses. He calls this system a needs-based organization where the customers are comfortable and don’t feel pressured. He believes this will eventually became the standard way of compensating auto salespeople, as opposed to the commission-based approach.

“We’ve always been that way,” Burdick said. “People need to know that they are going to have a pay check every week. This takes anxiety out of their lives.”

The most staggering changes in the automobile industry in the past half-century has been the improved technology and efficiency. Burdick says today’s vehicles, no matter what brand, are too sophisticated for him to tinker with.

“It electronic diagnostics for all of them,” he said, adding that he personally test-drives every make and model that his dealer will sell. “I can’t fix the cars that I drive today. In the old days, it was just a carburetor, the distributor and coils. So much content has been added to the vehicles. That justified the price increase.”

The nature of the business has changed as well, Burdick explained. These days, manufacturers have strict requirements for the dealerships’ showrooms and facilities, and there are more training requirements for salespeople. Profit margins, meanwhile, have shrunk dramatically. Only the dealers with a very strong base of repeat customers survive.

Burdick dealerships service about 500 vehicles per day and sell an average of 500 vehicles per month. Returning customers who shop at the auto mall for their third or fourth cars are what helped the enterprise to grow, but it’s the reputable service business that helped Burdick stay afloat during the leaner times, such as the Great Recession and more recently the COVID-19 pandemic.

Burdick says the best part of his job is interacting with people – employees, customers and other business people. The worst part, he added, “is when people disappear.”

“I find it very difficult to part ways, but sometimes we have to,” he said. “Even if we have to let someone go, I still worry about them.”

Burdick said his enterprise still has room to acquire more franchises and brands, and he gets excited about the possibilities, but he cautions that he does not imagine he would ever take on something as extravagant as a Lamborghini, Ferrari, Bentley or Rolls Royce dealership.

“I can’t envision selling those in Central New York,” he said.

To stay fit — mentally, physically and spiritually — Burdick starts out every morning with a cup of coffee, stretches and does 15 to 20 minutes of Bible study before he heads out the door. He also exercises at the YMCA. When he’s not working, Burdick enjoys traveling and spending time outdoors. He has a vacation home in the Thousand Islands and owns hunting land in Nelson, Madison County. He has also hunted in Montana, Texas, New Mexico and the Carolinas.

He considers himself a traditional meat and potatoes guy, though since he got into hunting as an older adult, he has really taken a liking to eating some of the wild game he shoots, especially elk.

Burdick and his wife live in Brewerton. They have two grown children, Bryan and Erin (Bartleman), and eight grandchildren.

For missionary work, Burdick has made trips to Costa Rica, Senegal and the Dominican Republic, where he helped build churches and install water purification systems. He recalls one heart-breaking episode in the Dominican Republic when a group of young children carrying jars asked Burdick and his colleagues for the water in their coolers that they would have otherwise dumped out at the end of the day.

“You help the ones you can, but you come back and wish that you could have helped so many more,” he said. “When we learned that the Dominican Republic had some of the worst water quality in the world, we decided that it was important to get these purification systems in as many villages as we could.”

In Central New York, Burdick’s body of philanthropic work includes helping refugees from Nepal and Bhutan and establishing a charitable foundation. Since 1986, the Burdick Foundation has distributed more than $100,000 annually to area nonprofit agencies. He has lent some of his indoor space to help civic community organizations like Boy Scouts, Girl Scouts, Special Olympics, the Red Cross and several others hold fund-raisers and public events. He is the founding member of New Hope Crisis Pregnancy center. He has donated cars for nonprofit driver’s education programs, Syracuse University’s Courtesy Car Program, and Students Against Drunk Driving. He established and previously headed the Auto Show Charity Preview, which has donated more than $4 million to Syracuse area charities.

“We still have work to do,” he said. “The monetary aspect is certainly an important part, but the root issue is lack of faith.”

Burdick has known his closest friend, Lou Bregou, for over 50 years now. When they met, Bregou’s future father-in-law, Paul Bowker, and Burdick were building a stock car in a one-car garage.

“I had a Corvette at the time,” Bregou said, “but I thought what they were building was more impressive. And Roger was the one that raced it.”

Burdick hired Bregou to sell cars in 1983. Bregou stuck with the growing business, eventually getting promoted to operations director and working as Roger’s right-hand man. Bregou, 70, plans to retire later this year.

They joke about how, at expos and manufacturers meetings, automobile industry big wigs who have not met Burdick before assume Bregou is the business owner because Roger is a little quieter and prefers to listen instead of talking.

“When his business took off, he never changed. He’s one of the most humble persons I’ve known. He’s fair and honest, and he never brags,” Bregou said. “But don’t let him fool you: He’s still the guy who can fix anything.”

Q.: What are you currently driving?

A.:  A Volkswagen Atlas. It’s got the extra seating for my grandkids, and plenty of room for my hunting gear. It’s been a great vehicle.

Q.: You drive every make and model that you sell. What is your favorite vehicle of all time?

A.: That’s a hard question. My dad’s advice was, “Don’t fall in love with a car, because you’ve got to sell it! I can tell you that I’ve always been very impressed by the Corvette. General Motors has been able to provide an exotic car but not at an exotic price.”

A: A fan yes, but I couldn’t afford them at the time. Much later on, my son and I restored a Pontiac GTO when he was in high school. They are a lot of fun, but the downside is they need constant TLC. If you don’t tinker with them all the time, they start having problems.

Q.: In your opinion, what was the worst car ever made?

A: The Yugo. They were built in Yugoslavia and sold a lot in Eastern Europe, and somehow some of them made it into the States. They were built with outdated technology, were unreliable and unsafe. It was based on a Russian model that was a very poor design.

Q.: What have been your hottest sellers lately?

A.: Trucks have taken off as the hottest item. These days, a pickup truck is like a luxury car with a box on the back.