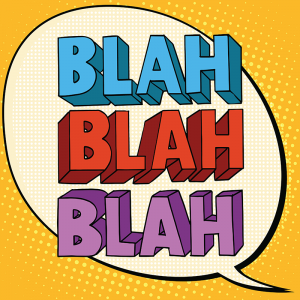 Observations of humanity have convinced me that most humans are very self-centered.

I have the tendency to talk about myself, to the point of ignoring what someone is saying to me. It was not uncommon for me to have a conversation with my late wife, Pat, at the breakfast table when she would tell me something and I would ask a question about what she just had said. “I just told you that,” she would say impatiently. I think this tendency to talk mostly about oneself is built into our nature as humans.

Maybe it’s because we know most about ourselves and our own experiences. When a friend accused me of always talking about myself, my response was, “If I didn’t talk about myself, I’d have nothing to say.”

Boasting is another human instinct that can be annoying. When I was accused of boasting, I replied, “If I didn’t tell people how great I was, nobody would.” I explained my actual viewpoint in one of my poems that appears in my poetry book for adults and children, “Strange Creatures and Other Poems:” The poem is titled: “My Greatness.”

Nobody says I’m great,
So I have to tell them all
That I’m the greatest person
That anyone can recall.

Why do I boast so much,
Much more than someone should?
‘Cause if I didn’t praise myself,
No other person would.

But someone who is truly great
Has no need to say,
‘Cause others do that job
In an enthusiastic way.

People like others who are self-confident, but not egotistical or narcissistic. Some people, like myself, are talkers; others are listeners. Pat always jokingly criticized me about excessive talking. I once told her, “I’ve been exercising so much that my shoulders are getting too broad and my neck is getting too thick.” Her reply was, “That’s from talking too much.” On another occasion, Pat had a sore back. I said, “Can I help?” Her reply was, “Yes, you can stop talking.” Another time, I needed an endoscopy to check my gastrointestinal system. This procedure involved inserting a flexible stem with a tiny camera into the esophagus. A questionnaire item before the procedure was “Do you have trouble opening your mouth?” Pat immediately quipped, “That’s not a problem for you.”

I have a legacy of talking too much, mostly about myself. Everyone loves a good listener. I once attended a workshop on listening. The participants were paired off and we were told to face each other and first pretend we were not listening, then pretend that we were actively listening, and tell our feelings. The results clearly demonstrated that we feel good when someone listens to us — “What a terrific person Sam is. He’s so nice.”

The workshop didn’t do much to change my talking about myself, but it provided an important point to think about in the future. We all need to learn how to be better listeners and restrict the tendency to talk about ourselves too much.

Get brain in gear first

One problem with talking too much is that words sometimes come from the mouth without being first processed in the brain. We have all experienced saying something that was inappropriate or offensive to others. The problem is that once words leave our mouths, we cannot get them back. So, it’s important to think about what we say before we say it. I wrote a poem that appears in my book “Strange Creatures and Other Poems” that expresses my thoughts about words and insults. The poem is titled: “Words.”

Words are sort of fun to use,
They also can be strange,
Rambunctious, rambling, elevate,
Ambitious, stress, arrange.

Words are an important way
To tell the way we feel,
They help us tell to others
What’s fantasy or real.

Words can act as weapons,
They can hurt and sting,
They can make you laugh or cry,
They say most anything.

So, think before you speak,
Let words come from your brain,
For once they’ve left your mouth,
You can’t take them back again.

No matter how hard we try not to, we are bound to sometimes say something that is offensive to someone else. Unintentionally, our words may hurt someone’s feelings. Even minor insults may stay in someone’s mind for a long time. That’s why it is so important to THINK before we speak.

Talking a lot is not always a bad thing. After all, it is a major way of communicating and relating to others. I once told a student in my class, “I talk too much.” The student replied, “But you have a lot to say.” This student earned an “A” in the course.

I once gave a lecture to medical students at Upstate Medical University. My talk went on and on and on. Then, a student started waving a white flag of surrender in the back of the auditorium. I glanced at the clock on the wall. Oh no! I had talked for an hour over time. Then, I realized that someone had moved the clock hand an hour ahead to give me a signal to stop talking.

I once taught a graduate course in the evening. Again, I couldn’t stop talking. Then, students started bringing dinner to the class. I asked why they did this? “A full mouth is a quiet mouth,” was the reply. It was their way of curtailing my endless talking.

I believe everyone should take a course in public speaking. No matter what you do in life, you will sometimes have to give a presentation to a group. So, learning how to speak and communicate well is an important skill in life.

However, some people, like myself, can’t seem to stop talking, especially about myself. I want to share my personal experiences with others. However, I recall an incident when I was exercising in an active older adults exercise class. I had a bad cold. I usually spent a lot of the class time exercising my mouth and yelling out jokes and comments. One time, I announced to the class, “I can’t talk today because I have a cold. That’s bad!” A voice responded, “That’s not bad for the rest of us!” Another time, I yelled, “Today I’m only going to make trivial remarks.” A voice responded, “I thought they were all trivial!”

People tend to shy away from excessive talkers. Once, I arrived late at an exercise class. One lady was sitting in a chair with her head buried between her hands. “Do you have a headache?” I asked. Her quick reply was, “I didn’t have one until I saw you coming.” Obviously, excessive talking does not result in popularity.

I guess the best procedure for talkative people is to become more aware of self-centered tendencies and to learn to focus on what others are saying and try to become good, active listeners. The ultimate cure may well be Pat’s last words to me, “Marvin, shut up!”