So you think you have your “golden years” all figured out? Guess again! 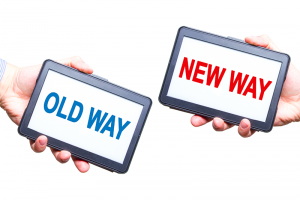 I remember when bottled water first came on the market. It seemed like such a joke, like bottling air and selling it.

It is just water, right? You turn on the tap and there it is. Why would you pay for it?

Obviously, I’m not someone you want to get investment advice from. Everywhere you look, someone is carrying bottled water around. I think I’m probably late on getting in on the air thing too.

This led me to think how just existing is now so much more difficult than it used to be.

When I contemplated retirement, one of the things I looked forward to was having the time to enjoy leisurely meals and not always be gulping down food and rushing off to something. I thought a typical day would be exercising at a reasonable hour, not 6:30 in the morning, coming home and having a late, relaxing breakfast while reading the newspaper.

Sitting around and reading books in the afternoon would be next on the itinerary, and then maybe a little tea, or sherry, around 5:30-ish.

That plan has not worked out well at all.

Let me explain why.

Though the exercising part is mostly going OK, I really have to force myself out the door to get to a class because I don’t have anything urgent, like getting to work on time, to motivate me to move fast.

But breakfast! How could breakfast have gotten so screwed up?

First, the “chewing issue” has supplanted the relaxing part.

What’s to think about chewing? Food goes in the mouth, you enjoy the taste, you chew, and you swallow, right? Wrong.

Now we’re told you have to chew up to 30 times a bite! Why? Digestion actually starts in the mouth when the food mixes with saliva; otherwise you’re not getting the nutrients from the food.

Who thinks about saliva? Like it’s there, until it’s not, then you worry about it. But now I have to work at making enough saliva to chew my grass-fed meat (another issue altogether), which is what I thought the cow had actually done already.

It was sort of like a partnership with the cow. They chew the cud, etc., though in retrospect I can see it’s not that great of a deal for the cow either way.

So, now that nice 20 minute leisurely breakfast has turned into another aerobic workout, except this time for the mouth, which if you have temporomandibular joint disorders, is another problem.

It’s hard to just enjoy the food if you’re counting your bites through the whole meal. By the time I’m done chewing everything, it’s time for the next meal.

Then there’s the newspaper part. For me, it doesn’t exist any more on paper. I read it on my iPad and flipping the electronic pages with sticky fingers does not make for a relaxing meal either.

I’m sure there are lots of constipated people out there on the days the newspaper isn’t delivered; the fix is to go digital.

OK, one way or another, we’re through breakfast and it’s time to just lie on the sofa and read. The problem with that is I can’t get over the guilty feeling I have about reading anything except news before 5 p.m.

I feel I have to be doing something meaningful, like vacuuming or dusting. I can’t remember the last time I actually dusted, but the intention is there.

In any event, by the time I get to 5 p.m., somehow sherry just doesn’t seem to cut it any more. I mean, how many people do you see at bars ordering a glass of sherry? It’s just not cool. But anyway, drinking isn’t good for balance and when you get older, staying upright is important.

Even breathing has become a big deal. In looking at my health options in retirement, breathing I figured was something I was good at; I’ve been doing it for quite a while.

Suddenly, it’s not enough to just breathe; you have to breathe correctly through your nose and not your mouth. Meanwhile, chest breathing is so 1990s. It should be abdominal or deep breathing — X counts in, Y counts out.

Sometimes I get so focused on doing it right that I forget to actually breathe.

Now we’re up to dinner. My all-time favorite meal was spaghetti and meatballs. Also, I enjoyed pizza with everything on it.  When we were in college and would go out to dinner with my then-fiancé’s parents, they couldn’t get over the fact that I could eat a whole pizza by myself.

Now I’m gluten-and dairy-free and a cauliflower pizza with dairy-free cheese just doesn’t do the trick.

A favorite treat to eat with my father was raw onion sandwiches. It consisted of two slices of white bread, onions, salt, pepper and ketchup. (OK, so I didn’t date a lot in those days.) I can’t even imagine what that sandwich would do to me now.

Now, we’re up to bedtime. Forget just lying down and going to sleep. You need “quality sleep” or you might as well stay up and watch TV, which of course would disturb your quality sleep. That is because it has blue light and that’s bad for your biorhythms as blue wavelengths suppress delta brainwaves that induce sleep.

So, between trying to breathe through my nose, having the right light, and trying not to interrupt my “deep-sleep” mode by answering nature’s call at 2 a.m. (and 4 and 6, but who’s counting?) I’m not sleeping well at all.

Then there’s the pillow between the knees to keep my back in alignment. So I have to check my breathing, try not to lose the pillow when tossing and turning, try not to wet the bed — oh wait, I forgot the leg cramps.

I know, I sound whiney. Well, I told you it was trivial.