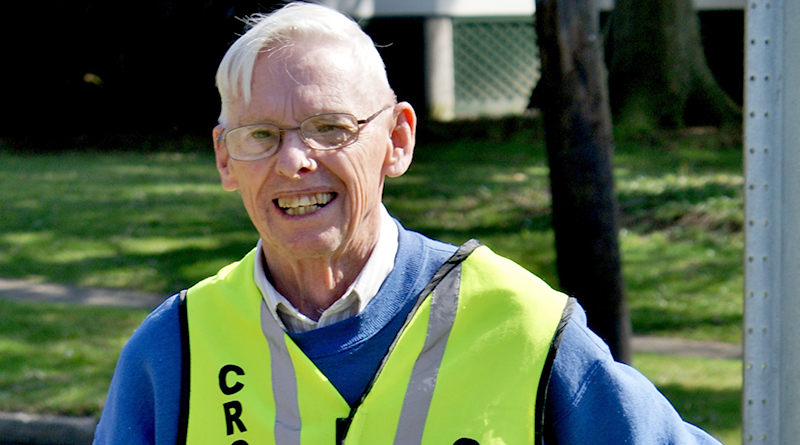 Skaneateles resident honored as Onondaga County’s Senior of the Year

Q. How do you feel about being senior of the year?

A. It’s all right, but no big deal. I’ve volunteered for 65 years. I started out as a Mason and volunteered sometimes. I used to volunteer at Community General Hospital. Me and my wife, Janice, did Meals on Wheels for years. I volunteer yet for Laker Limo in Skaneateles. That’s a bus where we pick up the elderly. I work on it Wednesday once a month. We go out and we pick up elderly people at homes and we take them out to lunch up at the Y. Then we go and pick them up and take them home again. It’s a nice feature for the elderly. I did drive for quite a while and then I had an accident. I gave up driving and I figured I’d be an escort. I’m getting people on and off that are younger than I am.

Q. What else do you do to help the community?

A. I’m a school crossing guard twice a day — get the little kiddies across. I like that. I started out doing it because it makes you get up and go. I have to be down there at quarter after 8 and then again at quarter after 3 in the afternoon. Sometimes you’ll have quite a few and sometimes you’ll have three or four. The parents are very appreciative. I’ve been doing that about 10 years. It gets a little bit nippy in the morning in the winter. You bundle up!

Q. What motivates you?

A. My kids. I was very fortunate. I have the three children right here in Skaneateles.

Q. What do you like about living in Skaneateles?

A. I was born and brought up in Marcellus. My lovely wife, she was brought up in Auburn. We built here. We bought the lot. We had the house built in ‘54. It’s been here ever since. I retired as a salesman. I was a territory manager for an air conditioning company for years calling on HVAC contractors. I retired in 1987. I used to have the North Country and, boy, in the winter time it would get kind of wild and willy up there. I came out of a motel in Massena one morning and I asked how cold it was. They said it was 30 below zero. It gets cold up there.

A. Very good. I was born and bred here.

Q. Tell us about your experience in the Navy?

A. I was in the Navy and saw quite a bit of the country and some of the world —China. I’m a World War II vet. I was on the USS Los Angeles. It was a heavy cruiser. On the heavy cruiser you had two eight-inch turrets, one forward and one aft. I was what they called a trainer. I would turn the turret to whatever degree they would say to turn to. I joined when I was 17. I didn’t see combat. I joined when the war was still on, but then by the time I got out there it was over. I had a good time. We went out to China. The thing that really impressed me was when we were going out with the heavy cruiser we pulled into Pearl Harbor and some of the ships were still there partially sunk. That was really quite an impression.

“I joined at 17 and my mother had to sign for me. She said ‘I’ll sign for you if you promise never to smoke or drink.’ So I didn’t. But I used to bring the guys back because I was the only sober one — get ‘em back on board.

Q. Do you do anything to commemorate your service?

A. They put a flag up for me every year on Veterans Day. Down by the lake they have a whole bunch of flags. Must be a hundred sometimes. They put your name on one if you contribute money to it. And then we have a tradition. Me and my kids go to lunch, usually at Johnny Angels. It’s a nice thing.”

Q. What advice do you give to other seniors?

A.  Keep active. You got to keep active. I think seniors should be volunteering their time. There’s things to volunteer for.