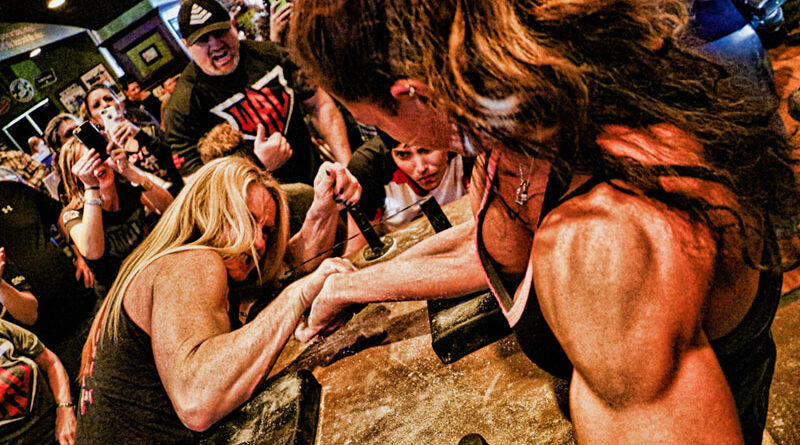 Like any doting grandmother, Michelle Dougan of Liverpool enjoys spending time with her five grandchildren.

An active 55-year-old, she loves walking and hiking. Dougan has also won the World Championship for the World Arm Wrestling League.

Her entrance into the world of competitive arm wrestling is even less predictable.

Dougan was overweight as a child. One summer, she began to swim and ride her bike more and lost weight. She liked feeling so healthy and looking trim and strong. She continued working out and grew up to become a certified personal trainer. She and her husband, James, a private investigator, eventually moved from Erie, Pennsylvania, to Liverpool and she began training clients at Elite Fitness.

Despite her healthy lifestyle, Dougan faced cancer three times: thyroid cancer in 2009 and melanoma in 2006 and 2021. To treat her thyroid cancer, she had her thyroid and many lymph nodes removed. In addition to recovering from surgery, Dougan felt sick from the ensuing hormone imbalance. While taking prescription medication to replace the hormones her absent thyroid had made, it takes time to get the dose right. For a few years, she struggled to regain her health.

“I couldn’t get out of bed and felt miserable,” she recalled. “My husband spoke with Dan Carr, a friend who’s from Erie. He is one of the top arm wrestlers in the nation and a referee for the World Arm Wrestling League. He suggested to my husband that I try arm wrestling because I’ve always been strong.”

While taking up arm wrestling as part of her recovery seems peculiar, it was just the lure to draw Dougan back to the gym. In 2014, she attended a practice of about a dozen arm wrestlers in Chittenango and loved it immediately.

“I felt my strength again,” Dougan said. “I felt so weak and helpless for so long and realized I am strong. It changed everything.”

She kept practicing to improve her technique and performed wrist curls, bicep curls and grip exercises to increase her strength. The hard work paid off. Within three years, she won the world championship in Las Vegas, besting 25 women in her middleweight class with her right arm. She won third place with her left arm.

“People think you put your arm up and you just go, but there’s a lot of technique,” Dougan said.

Arm wrestling is more complicated than that.

Competitors typically stand to arm wrestle. Chalk on the hands is permitted. Their non-wrestling hand grasps a peg and the wrestling arm’s elbow wrests on a pad. During the entire match, the grasping hand and elbow must remain in place or the referee will call a foul.

“The ref says, ‘Close your thumbs, close your hands and go,’” Dougan said. “Then, you go. It moves pretty fast. Every tournament around here has running fouls. If you foul, they let you know. You have to win at that point or you’re out of the match.”

Intentional slipping is a foul, as is when a participant turns the wrist before the match starts. Every event is double elimination.

She attends bigger practices out of state and competes about once or twice a month. She typically arm-wrestles five or six times at each event when she keeps winning. She used to participate in more competitions. However, she since realized that her body requires three weeks to bounce back from what she calls “a full body sport.”

“A healthy person in their 30s, it takes a week and a half to two weeks unless injured,” Dougan added.

She admits she is a little obsessed with arm wrestling and trains for competitions continually. Dougan competes in and out of the WAL and James is the East Coast director of the organization.

About 25% of participants at WAL and other events are women, a statistic Dougan would like to increase.

Dougan has as a goal a rematch against a Canadian arm wrestler who beat her at her last match.

She is a signed athlete with the WAL and was asked last year to join The Top Eight, a group of elite women arm wrestlers. She hopes to compete in Sweden this year, too.

Dougan’s wrestling nickname is the Black Scorpion, bestowed on her by Carr.

“When a legend like Dan Carr gives you a nickname, you use it,” Dougan said.

While arm wrestling seems an oddball activity for a grandma, Dougan has embraced it, as has her family.

“My husband is all about it,” Dougan said. “My kids at first thought it was a little crazy. After they saw I was serious they were all about it. My granddaughter wrestled in one of our tournaments and got third.”

The WAL presents a competition at the New York State Fair each year.

Photo: Michelle Dougan is pictured at the World Armwrestling Super Qualifier in 2016 in Syracuse. She had been competing only two years and faced Christy Resendes, an armwrestling and body building champion.