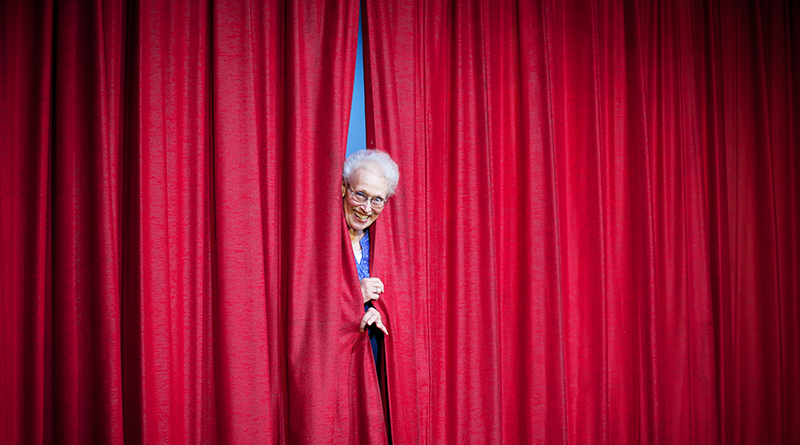 The show goes on for lifelong thespian Inez Parker

When Inez Parker reflects on her life, she remembers it not in pieces, but in performances.

The feisty, quick-witted 77-year-old loves to recount her time on stage when she was an employee at SUNY Oswego and a member of the Oswego Players, a local community theater company. She bounces from one memory of a show to another, often reciting the lines and even breaking into the songs from performances she delivered decades ago.

“Theater has been a huge, huge part of my life,” Parker said. “It’s been fun, and I have loved it.”

Although she’s now retired from SUNY Oswego, Parker is still a pivotal member of The Oswego Players. The organization is celebrating its 80th anniversary this year; Parker has been there for 60 of them.

She’s a second-generation member. Her father, Norman Manor, drew Parker into the theater  when he commissioned her help for his performances.

“He had big roles,” Parker said. “My father was a leading-man-type person because he was a handsome man — he looked like Don Johnson — and he would have trouble learning lines. So he and I would sit up in my bedroom on my bed and I would do lines with him.”

As Manor continued with the Players, Parker developed the itch to get on stage herself.

“To see him up on the stage was a thrill — was just a thrill,” Parker said. “I already had the bug when I was a kid because of my father.”

Parker says performing came naturally to her, whether it was acting or singing. She joined the Players and participated in productions in high school. Post-graduation, Parker got a job at SUNY Oswego’s Penfield Library, where she would go on to work for 41 years. But the college, rather than the library, turned out to be the best fit for Parker.

Ready for her close up

After working full days at Penfield Library, Parker would stay on campus. That’s when her theatrical career came to life.

She was one of the founding members of the Oswego Opera Theatre, serving as both a cast member and the organization’s secretary. The group of professional singers, college employees and students staged dozens of operas, musicals and galas. It was led by James Soluri, a professor of music at SUNY Oswego who was responsible for bringing Parker from the library to the theater.

“I studied with him and I learned a lot from him,” Parker said. “He was a wonderful musician.”

Parker continued working with the Oswego Players, but she was “up to her eyeballs” with the opera. That work included starring in, and later co-producing, the group’s annual summer musical, where she formed some of her fondest memories on stage.

“I did Cousin Nettie in ‘Carousel’ and it’s one of my most favorite things,” Parker said. “She sings ‘You’ll Never Walk Alone’ and out of the seven performances we did, every night I got a standing ovation. It was thrilling to say the least.”

Her other favorite roles include playing Lady Thiang in “The King and I” and Little Buttercup in the opera “H.M.S. Pinafore.” That’s where she got to perform with Craig Schulman, a former SUNY Oswego student who went on to a successful Broadway career. He’s the only actor to have performed the lead roles in “Jekyll & Hyde,” “Les Miserables” and “The Phantom of the Opera.” The two became very close friends.

In addition to the summer musicals, Parker also participated in the college’s dinner theater shows. That’s where she played Momma Morton in “Chicago,” a performance she dedicated to her father because he passed away while she was in rehearsal.

“I said to my mother, ‘what will I do?’” Parker said. “My mother asked, ‘What the hell do you mean, what will you do? You’re an actress. You go act.’ And that I got from my father. The show goes on and you go on with it.”

When Parker wasn’t doing shows at SUNY Oswego, she would travel to Syracuse to perform with the Syracuse Musical Drama Company. But most of her credits have been with the Oswego Players.

Parker has served the organization as an actress, director, stage manager and its longest serving president — 16 years in total.

McKinney says he has relied on Parker’s input and knowledge of the organization since he took on the job of president. She’s the oldest active member of the Players, and has served in various positions on the board of directors since her last term as president ended in 2012.

Parker says when she’s involved with an organization, she’s involved all of the way. Sonia Berlin, a board member who joined the Oswego Players in 2000, can attest to that. She says Parker devotes hours each day to the organization.

“A lot of people have a tendency to come in and do one show for the year and that’s their show and then they’re done,” Berlin said. “But we’re involved with everything.”

That includes fundraising, costuming, advertising and running the box office.

“If I can’t make a commitment, she’s always there to pick it up,” Berlin said. “If we need someone to meet someone – I don’t care if it’s meet the repair man or someone to check the fire extinguishers – she readily gives of herself any time she’s asked.”

Perhaps Parker’s biggest contribution to the Oswego Players has been as a director. She has directed at least one show for the organization each year for decades, including many of its blockbuster summer musicals. Several members who direct now first learned the ropes from Parker.

“That’s why I do theater, because you can create and make it alive and real,” Parker said.

Directing also offers Parker a chance to continue contributing to the Oswego Players productions despite a few challenges as the years have passed. She lost her singing voice in the early 2000s and developed sclerosis, leaving her with two rods in her back.

But those obstacles haven’t sidelined Parker entirely. She’s played supporting roles in a few shows and returned to the stage for a leading role last year in the Players’ production of “The Last of the Red Hot Lovers” by Neil Simon.

“I hadn’t been on stage to have a [leading] role in over 12 years,” Parker said. “And I tell you, it felt just like it did when I was a kid. It was wonderful. It was so much fun to do.”

McKinney directed Parker in the play. He said it was difficult for her to commit so many lines to memory after such a long break from acting. But she “worked her tail off” and it was a success, he said.

“I think the best part of that whole experience was to see her on stage again,” McKinney said. “When she’s on stage, the stage lights up. She has many, many fans and followers who look forward to seeing her. People came up afterward to me to say thank you, that’s why they came.”

That’s the one part of theater that a lot of people don’t realize, Parker says. You can do anything if you make your mind up to it.

Parker’s faith is equally as important to her identity. She’s a longtime member of the Episcopal Church of the Resurrection in Oswego. It’s where she met her ex-husband John Parker Jr., with whom she had her only child Victoria in 1974.

Parker has served as a singer, reader and a Eucharistic minister at the church. She also helps coordinate the fundraisers, including a book sale, spring luncheon and – no surprise – a dinner theater show that she stages at the Church of the Resurrection.

She lives for the theater – and even nearly died for it. During a production of “Oh Dad, Poor Dad, Mamma’s Hung You in the Closet and I’m Feelin’ So Sad,” Parker’s character was being murdered on stage when the lines between fiction and reality started to blur.

“There’s a scene where he tries to eliminate her,” Parker said. “He had this pillow and he was killing me to the music and I turned my head and I started to black out because he had the damn pillow over my face and he was so into it. Thank God the [rotating set] started to turn and I was able to gasp for air.”

The experience might have deterred some from returning to the stage, but Parker’s irreverent sense of humor wouldn’t let her see it that way. That’s what makes theatre fun, she says.

“The affection I feel for this organization is unbounded. I mean it,” Parker said. “I’m very proud of it.”
She admits that the Oswego Players faces its share of challenges, namely that many of the core members like her are older.

Parker says the organization needs youth, and the continuing support of the local community. But both Berlin and McKinley say it’s nothing she can’t handle. Parker has been with the organization through tough times before, like when the county and city pulled its funding from the group.

Parker, who calls herself the little train who thought she could and did, isn’t giving up.

“I will continue with the Players as long as I live. Period,” Parker said. “And I mean that with all of my heart. That is truth. As long as the Lord gives me breath in my body.”