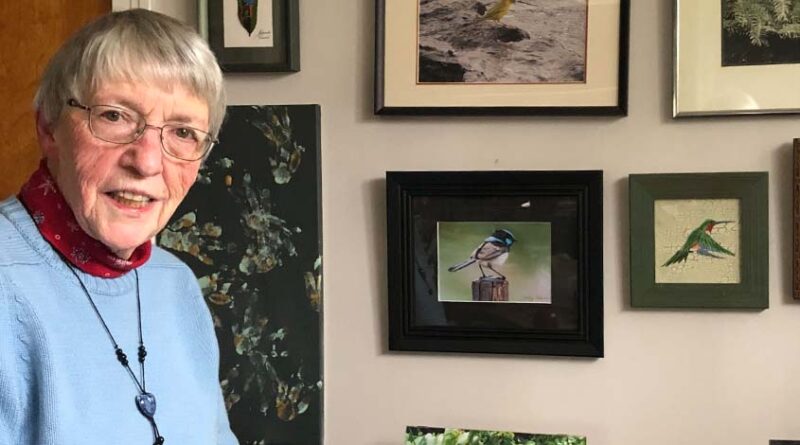 Molly Fulton has traveled around the world, quite literally.

It took her more than 70 years to complete her circumnavigation.

Fulton, 80, is delighted to say she has circled the globe by sea and share her travel experiences with others.

Last fall, she celebrated her achievement by hosting a party and a slideshow of her adventures for friends at the Rosamond Gifford Zoo, where she is a longtime volunteer.

“Sailing around the world is not something I set out to do,’’ Fulton said. “I was excited about it. I never thought I would get it done.’’

Some circumnavigators circle the globe as part of one long, continuous trip. Fulton circled the world in her own time and in her own way. The first voyage in her journey, in 1950, took her from Brooklyn to Singapore via the Atlantic Ocean, Mediterranean Sea, Suez Canal, Red Sea and Arabian Sea.

The second leg took her from Penang (Malaysia) to Singapore to Hong Kong to Japan via the Straits of Malacca and the South China Sea.

The third leg, from Japan to San Francisco, across the Pacific Ocean, included no stops in other countries. Both of those trips were in 1952.

In 2019, after many trips to all corners of the world, Fulton decided she wanted to complete her circumnavigation. She had one last leg to complete: San Francisco to New York or vice versa. She invited her longtime travel companion, Pearl, who lives in Colorado, to join her. They’ve taken dozens of trips together and in January of 2020, they embarked on a cruise from New York to San Francisco via the Atlantic Ocean, Caribbean Sea, Panama Canal and Pacific Ocean. It was Fulton’s second trip through the Panama Canal.

She returned home to Central New York just as the pandemic hit in March of 2020. And she pretty much stayed put until September of 2021, when she traveled to Iceland. “I was getting restless,’’ Fulton said.

Fulton lives in Marcellus, in a house brimming with photographs, artwork and souvenirs from her travels. All her life has been a journey, in one way or another.

She was born in Scotland in 1941 to a single mother and a father not listed on her birth certificate. Her mother later married her stepfather and died after giving birth to the youngest of her four half siblings. Her stepfather was unable to care for the children and they were separated and placed in orphanages. An American couple (he was a state department official stationed in Glasgow) wanted to adopt Molly, but foreign adoptions weren’t legal then. The couple was appointed her legal guardians.

In 1950, she left Scotland with her adoptive parents and sailed to the United States and later to Burma (now Myanmar). They lived in Burma for two years before returning to the U.S.

Fulton grew up mostly in New Jersey and attended Bethany College, a small, liberal arts college in West Virginia. She met her future husband there. His work as a United Methodist minister eventually brought them to Central New York. They lived in Barneveld and Chadwicks, in the Utica-Rome area, before moving to Marcellus. They had two children and eventually divorced.

Fulton volunteered at the Marcellus Library and at the elementary school library in Marcellus before joining the staff of Syracuse University’s Bird Library.

She spent 15 years there in several departments, including the area studies section, which introduced her to faculty and students from all over the world. Professors submitted special reserve lists of books they wanted students to read and Fulton’s job was to gather the books.

After leaving the library, Fulton spent more than 20 years as a caregiver and companion, working both independently and for an agency. She had a knack for it, and helped clients with personal care, housekeeping, meal preparation, errands and appointments. She often found herself sharing her travel experiences.

“I enjoyed talking about it and they enjoyed hearing about it,’’ she recalled. “It got them out of themselves. They would ask me a lot of questions.’’

Fulton’s early trips and vacations with her adoptive parents cemented her interest in travel, especially travel to off-the-beaten path destinations. She has logged hundreds of thousands of miles by air and sea and estimates she has visited 100 countries. She has crossed the Tropic of Cancer (the most northern latitude on earth), the Tropic of Capricorn (its southern equivalent), the Equator, the Arctic Circle and Greenwich Mean Time (the Earth’s zero-degree line of longitude).

She counts among her most memorable trips two visits to China in the late 1980s and a trip to South Africa toward the end of the apartheid era. These were small group trips with the Presbyterian Church and participants sometimes stayed with families. “After the first trip to China,’’ Fulton said, “I learned I really like to travel and learn things.’’

Fulton has taken more than 10 trips with Overseas Adventure Travel, a Boston-based company that specializes in small group tours, often less than 20 people, to destinations less traveled. These are not big commercial cruise ships with amenities like casinos and clubs. They’re small ships, some of them former Russian research vessels being put to new use. “I’ve always been more interested in where I was going and what I was going to see than in accommodations,’’ Fulton said.

Why travel by water when you can get to your destination more quickly by plane? It’s more relaxing, for one thing. “Oh, I love to be on the water,’’ Fulton said. “If you stay on the deck, you can see so much.’’ On a small ship, passengers are often able to visit the bridge and learn how many miles they’ve traveled overnight and how many miles they’ll cover on a given day. You can sit on the deck and read a book (Fulton recommends a shady spot under the lifeboats) and take walks.

‘I’m not ready to give up travel yet. I think everyone should travel. It gives you a whole different perspective on things.’

From the deck of ships, Fulton has seen whales, seals, sailfish, turtles, dolphins and many species of birds, including albatross and osprey. She has been seasick just once, tossed about her cabin while crossing the Drake Passage, the often-turbulent stretch of water between the southernmost tip of South America and the South Shetland Islands of Antarctica.

Fulton has at times felt unsettled in life. Travel has helped her get through the rough patches. She has taken numerous trips to Scotland to find her siblings and bring them together.

One of her sisters was adopted and moved to California, near Los Angeles. Two sisters are still in Scotland. A brother died in 1999. It bothers her to this day that she knows little about her birth father. “I’m still curious about my father,’’ she said. “There’s a blank there.’’

Later this year, Fulton will voyage to Georgia, Armenia and possibly Azerbaijan with Overseas Adventure Travel. The most challenging aspect of travel is managing heavy luggage, she said. She also must consider her health. She has sarcoidosis, an inflammatory disease that affects her lungs and breathing, and sleep apnea, a disorder in which breathing frequently stops and starts during sleep. She travels with a continuous positive airway pressure (CPAP) machine for breathing assistance at night.

“I’m not ready to give up travel yet,’’ Fulton said. “I think everyone should travel. It gives you a whole different perspective on things.’’

A Love For Animals

Molly Fulton has always loved animals. And, animals play a big part in her travel adventures and her life in Central New York.

In 1996, Fulton began service as a volunteer at the Rosamond Gifford Zoo in Syracuse. Initially she gave tours several days a week. But she needed a regular schedule. She started working in the bird department, where her supervisor was then Bird Collection Manager Ted Fox, now the zoo’s director. These days, she volunteers two days a week in the Diversity of Birds aviary, where she does everything from cleaning bird excrement off the floors to monitoring bird behavior to feeding birds. Some birds will eat from her hand.

“I have had the pleasure of working with Molly for many years. She is exemplary in pretty much every aspect of the human condition,’’ Fox said in an email. “She is caring about conservation education and the welfare of every animal and she’s always someone I would want to have on hand to observe interactions between animals, such as the introduction of two new animals or a fledgling bird leaving the nest. And I appreciate her willingness to share her experiences with many people who might never experience the same things.”

Fulton’s most memorable trips and expeditions for seeing animals in the wild include Southern Africa, where she saw lions, leopards, elephants, wild dogs, snakes and lizards, and Australia, where she and her friend, Pearl, drove a third of the way across the vast country on a birding expedition with a guide who lives there.

“We prepared a lot of our own meals and stayed in caravan parks and at cattle stations,’’ Fulton recalled. “You can’t pass up having someone who lives in the country show you around. We had a lot of interesting experiences.’’

Featured image: Molly Fulton at her Marcellus home in front of photos of birds. These days, she volunteers two days a week in the Diversity of Birds aviary at Rosamond Gifford Zoo in Syracuse.