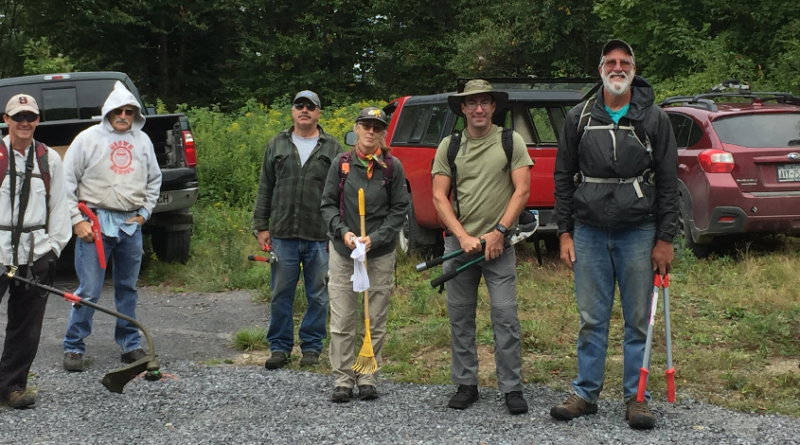 Many older adults throughout Central New York have hiked on outdoor trails for years to stay active, maintain their health and catch some amazing scenery along the way.

Several years ago, a group with a passion for hiking in the Tug Hill region decided to take things one step further. They volunteered to build a new trail that would allow themselves and others a closer look at remote areas within the core forest that had been impossible to reach by foot.

When it’s completed, this awe inspiring 20-mile-long trail, known as the Traverse Trail, will cut across the region’s dense core forest of nearly 175,000 acres that has often been called “the Heart of Tug Hill.”

The trail work has primarily been done by a small group of volunteers who jokingly refer to themselves as the “geriatric trail crew,” said organizer Robert McNamara, 71, of Cleveland in southern Oswego County.

McNamara, a trained landscape architect, is a well-known wildlife artist, environmental interpreter and the illustrator for a Tug Hill natural history guide. He has designed and installed numerous interpretive graphic panels, kiosks and exhibits throughout New York state.

“Most of the volunteers are in their 60s and 70s,” McNamara said. “We just keep chipping away at it, and we’ve been pretty efficient.”

The trail is approximately halfway done.

The volunteers have certainly not been afraid to get their hands dirty. They have logged hundreds of hours removing downed tree limbs, weed whacking and cutting back shrubs along the sides. Only a minimum number of trees have been cut down, and the narrow trail has been designed to discourage the use of motorized vehicles.

When the project is finished, it will be the first “foot trail” to cross through the Tug Hill core forest, and one of the longest continuous hiking trails outside of the Adirondack Park. Prior to the start of the Traverse Trail, any travel in the core forest has been primarily done with all-terrain vehicles or snowmobiles.

Although there have been many people over the past few years, both young and old, who have volunteered to work on the Traverse Trail, a core group have shown up for almost every scheduled workday. Along with McNamara, they include Bob Keller, 77, Ray Spahn, 59, Cindy Stewart, 61, and Zach Wakeman, 41.

The support from these devoted volunteers has been essential in keeping the project on track, McNamara said. Members of the Black River Chapter of the Adirondack Mountain Club have also volunteered in the past.

It was McNamara and Wakeman, also an Oswego County resident, who came up with the idea of creating a trail through the large dense forest. The dedicated naturalists had led hikes with others in the past, but knew there would be more to discover inside the core forest if a trail could be built across it.

“Tug Hill is different; it’s a very unique region,” McNamara said. “This new trail will give people a much closer look inside the core forest and a better opportunity to see so many things.”

A variety of trees, both northern hardwoods and softwoods, can be found in the dense forest. A wide range of wildlife exists, including different bird species, white-tailed deer, otters and beavers, along with a variety of plant habitats.

“The core forest has all types of plant communities, birds, wildlife, meadows and wetlands,” said McNamara. “You can still find some pockets of old, large-growth trees.”

A portion of the trail crosses through East Branch Fish Creek State Forest. In addition to running through state land, the trail will also cross through acreage owned by the Nature Conservancy and the Molpus Woodlands Groups. The Traverse Trail plan was approved by all three organizations.

Several miles of the trail run along the major creek. “It’s really beautiful, and the trail was designed to have several important viewpoints” along the East Branch of Fish Creek, McNamara said.

It’s been a rewarding experience to know that when the trail is completed, it will give others an opportunity to see a remote area of Tug Hill that has not been accessible by foot.

“It’s a hike that will be well worth the effort,” said McNamara. “There are really some spectacular views.”

McNamara, Keller and Wakeman are all members of the Tug Hill Tomorrow Land Trust, which has assisted with the project and helped to schedule workdays throughout each year.

The nonprofit organization was incorporated in 1991 to protect the open spaces, the working forests and farms of the Tug Hill region, along with promoting a greater appreciation of the area’s natural and cultural heritage.

The Tug Hill region includes parts of Oswego, Oneida, Jefferson and Lewis counties. When completed, the trail will start in the town of Montague near the Tug Hill State Wildlife Management Area and end near the Osceola-West Leyden Road in the town of Osceola. 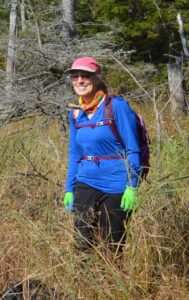 Although the Traverse Trail will primarily travel through Lewis County, it will be worth the drive for Central New Yorkers once it’s completed, McNamara said. Along with hikers, the trail is also expected to attract cross-country skiers during the winter months.

For updates on the trail progress and future volunteer opportunities, visit www.tughilltomorrowlandtrust. org