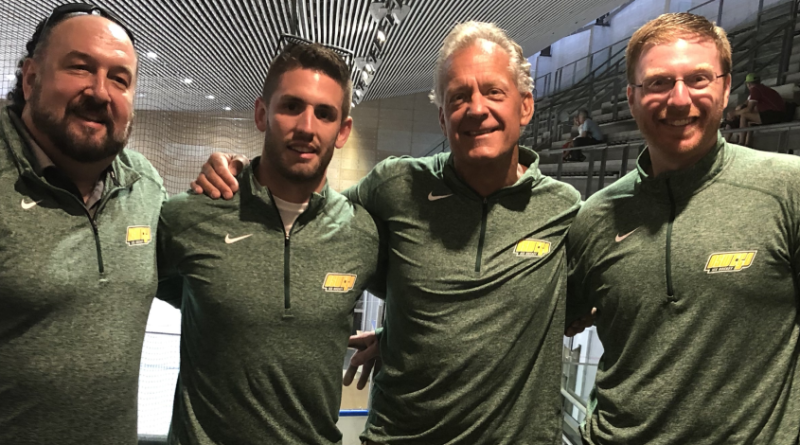 It’s that passion that has made Ed Gosek, the head coach of SUNY Oswego Lakers hockey team, the winningest coach in the college’s hockey program. At the end of the 2021-22 season, his overall winning record is .741. His teams have are consistently ranked high in Division III. In 2007, his team won the NCAA Championship and he was selected as Coach of the Year in 2007. He has been recognized on the state and national levels for his dedication to youth hockey. Since taking over as head coach in 2003, the teams have made appearances in the NCAA Frozen Four 10 times.

Moreover, Gosek has achieved these milestones in his hometown. A graduate of Oswego Catholic High School, he went on to play hockey for SUNY Oswego from 1979 to 1983, when he graduated with a bachelor’s degree in education. He was coaching the Oswego Minor Hockey Association — “trying to give back to the community,” he said — when he was approached by Don Unger, his former SUNY Oswego coach, to become an assistant at his alma mater.

When George Roll took over the team in 1997, Gosek stayed on as assistant and went on to get a master’s in education, and in 2003, when Roll left for Clarkson, he stepped into the head coaching position. He said that both Unger and Roll have had significant impacts on his career.

And while his office, inside the Deborah F. Stanley Arena and Convocation Center inside the Marano Campus Center, has a lot of memorabilia that underscores his accomplishments, there’s something that means more to him.

“As much as winning the national championship was an awesome experience, honestly, I take greater pride in that we consistently try to do things the right way,” he said.

For Gosek, that means not only recruiting the best players that SUNY Oswego can, but making sure they are good people as well.

“We want good people that represent our program the right way. It’s not win at all costs. We’re not going to compromise. I’m a firm believer that the players are a reflection of the coaching staff,” he said.

This philosophy, he believes, will make for success on the ice “whether that means winning a national championship or whether just producing good people to go out to the community,” he added.

It is also important to Gosek that the team members maintain their academics. They have a 3.4 team GPA, he said. But it is also important that they do a lot of community service, he said. It helps to build more character, it gets them involved in the Oswego community, and it enhances the rapport between the players and their fans.

As coach, he said, he tries to help the young men achieve their goals, not only on the ice, but to be “good students, be good role models and be good members in our community.”

The game of hockey has changed a great deal since Gosek was a player and even when he was a new coach.

The players, he said, are much more skilled, bigger, faster and stronger.

Technology over the years has also changed the game, impacting video, training methods and equipment. The recruiting part of his job has changed dramatically.

“Now you can get on and watch any kid anywhere play right on the internet. You’re not traveling as much as you used to. The ability to evaluate sitting right in the office is amazing,” he explained. But he was quick to add that the coaches still need to get out on the road and meet their potential players.

One thing that hasn’t changed is Gosek’s competitive spirit.

“I’m not going to let the younger coaches outwork us. For me, at 61, I look at my experience as an advantage.”

People, he said, ask him if he still gets out on the ice, to which he answers with an enthusiastic “yes.”

Often, he finds the practices more enjoyable than the games.

As he explained, “the challenge of pushing the players to get better, coming up with drills and being creative, trying to get the right combinations, get the personalities to mesh and get along.”

His experience in his nearly 20 years as a head coach has taught him to find balance in his life. He said that as a young coach, he had to be away from his wife, Mary, and their two children a lot, with the recruiting, practices, and the various camps. But over the years, he said he believes he’s become a more effective coach by taking some time off-season to reflect and to do some personal development, whether that’s reading or helping others.

He also believes that as a coach, he doesn’t need to be with the players all the time and that letting them make their own decisions sometimes allows them to develop.

The support he has and continues to receive from the college, the administration, his colleagues, his team and others is immeasurable, not only in his life as a coach, but in his personal life as well. He found great comfort in them when Mary was waging her battle with ovarian cancer, a fight she ultimately would lose about five years ago. The couple had been married 29 years. But while fighting her disease, Mary established Peaceful Remedies, which brings holistic therapy options and support to individuals contending with life- altering illnesses. Gosek continues to serve on that organization’s board as vice president.

Gosek believes that his drive and passion were instilled in him and his siblings by their parents, Leo and Mary Gosek. He said that they used to tell their children that whatever you choose to do, “do the best you can.” With his father as a firefighter and his mother donating her time to their church, the younger Goseks — Stan, Susan, Joe and Ed — “learned to give back to and try to just be good people,” he said. Stan is an accomplished musician and former chairman of the music department at SUNY Oswego; Susan is a teacher; and racing fans know of driver Joe Gosek, who has raced in the Indy 500.

The coach still marvels that two kids from a little Polish neighborhood in Oswego would go on to participate in sports on such national stages.

Gosek brings his love of hockey and his experience into the 2022-23 season.