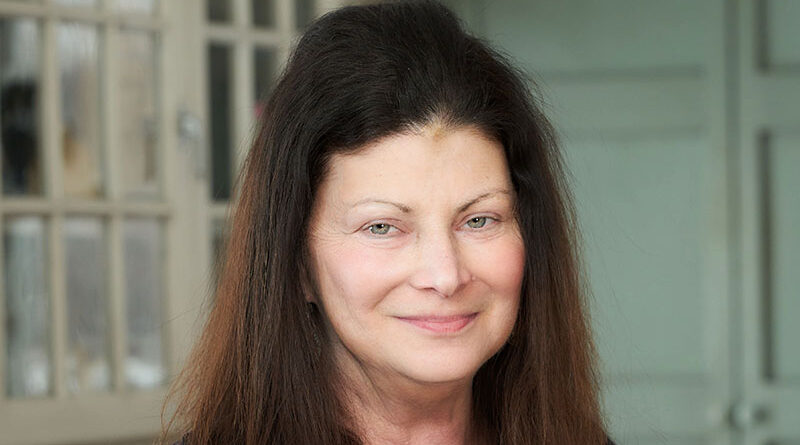 Recovering from a stroke, Mimi Griswold continues ‘Blue Moon Café’ and aims to get back to normal

Off the air, however, Griswold’s life isn’t easy like Sunday morning. Far from it.

Fans of “Blue Moon Cafe’’ know that Griswold suffered a stroke more than a year ago. What they might not know is just how debilitating that stroke was and the challenge it has been to move forward and regain her life.

“It’s a struggle,’’ the 63-year-old said. “You have good days and bad days. Stress will make me stumble and not be able to walk. Little things are frustrating, like trying to unwrap a stick of butter or a protein drink with one hand. Couple that with a person like me, who has very little patience, and it’s hard.’’

She is grateful for the unwavering support of her husband, Bob, their sons and her radio family and listeners. “I am learning to be patient,’’ Griswold said. “I am trying to remain positive. I am making progress.’’

Last year was a dumpster fire, to be sure, but for the Griswold family, 2019 was its own horror show.

In February, the Griswold’s daughter-in-law, Heather, and grandson, Davis, were critically injured in a freak accident while traveling on the Pennsylvania Turnpike. A tire and axle fell off a tractor-trailer, striking their car — and them. Son Michael Griswold, the driver, was uninjured, as were the couple’s two other young children.

Then, in November, after a painful bout of bladder stones, Griswold underwent a slew of tests to have gall bladder surgery — and learned she has lupus, an autoimmune disease that occurs when the body’s immune system attacks its own tissues and organs, including the heart, lungs, kidneys and brain. Griswold said her stroke was linked to lupus.

One night shortly before Christmas 2019, she woke up to use the bathroom and her legs gave out from under her. Bob Griswold helped her up and she went back to bed. When she awoke the next morning, she couldn’t walk. She called her cardiologist, thinking she was having an adverse reaction to medications. “I didn’t think anything of it,’’ Griswold recalled. “I wasn’t educated about strokes. I didn’t know what the signs are.’’

She was taken to Upstate Medical University and a few weeks later to an in-patient rehabilitation facility, where she began the long process of stroke recovery: regaining the use of her left hand and arm, learning how to walk again and doing hours upon hours of facial and mouth exercises to regain her speech — critical for anyone, but especially so for a radio executive and personality.

Griswold said Heather and Davis Griswold are doing well, and she is determined to resume being “the fun grandparent’’ to her grandkids that she was prior to her stroke. She and Bob moved to a farmhouse on the west side of Skaneateles Lake and she attends physical therapy three times a week in Skaneateles, focusing on her balance, legs, walking and strengthening her left hand and arm. Vision in her left eye is impaired and she is unable to drive. She’s confident walking on pavement and around the house, she said, but unsteady walking outside on uneven ground. Conquering using the stairs at home, one foot in front of the other while holding the handrail, was a major milestone.

On her own, outside of therapy, Griswold walks daily using a treadmill and said she’s working especially hard on regaining the use of her left arm and hand. “I just need basic functions. I don’t need to be able to paint,’’ she said with a laugh. She’s right-handed but typing with one hand and trying to do things she loves — like making a pie or baking a cake — can be daunting.

Griswold, whose given name is Mary, grew up in Brocton, a city about 25 miles south of Boston. She came to Syracuse University thinking she might like to be an investigative reporter, but ended up earning a degree in biopsychology. “I liked everything … English, economics … I changed my mind so many times,’’ Griswold recalled. “I wasn’t a very focused 18-year-old.’’

She felt at home in Central New York. She liked the fresh air, wide open spaces and easy access to the Adirondacks, one of her favorite places. She likes to hike and kayak and hit the road with no set destination or agenda.

Following graduation from SU in 1979, she went to work for The Cortland Standard, in production. She had her eyes on radio, and a couple years later she joined WQNY-FM in Ithaca, working in sales and promotion and serving as program director. She then moved to WKLL-FM as a program director and on-air talent. In 1992, she was hired by Galaxy Communications (now Galaxy Media Partners) in Syracuse and has been with the company ever since. As a programming executive, she oversaw almost everything on the air: content, music, commercials, promotions, staffing and mentoring of staff. At times, Griswold juggled programming for five stations at a time.

“There is a system, a science behind what songs you play,’’ she said. “You want to keep listeners there. There’s a lot of behind-the-scenes stuff and in this day and age a lot of interaction with the sales department and coming up with promotions for them. You’ve got to come up with a balance.’’

Griswold retired from Galaxy in 2012 but returned to the job a year later. “I begged her to come back,’’ said Ed Levine, president and chief executive officer of Galaxy Media Partners. “The challenge was Mimi made the job look so easy.’’

She is now fully retired, with the exception of “Blue Moon Café.’’ “I can’t work because of the stroke,’’ Griswold said, fighting back tears. “I loved what I did. It never felt like a job to me.’’

She was ecstatic to return to hosting “Blue Moon’’ in June 2020. The show is her baby. She created it in 1993 as a way to draw listeners on Sundays and its “comfortably eclectic,’’ free-form mix of music remains a winning formula. In the wake of her stroke and in light of COVID-19, Griswold has adjusted to a new way of doing the show. Each week, she creates a playlist and sends it to TK99 disc jockey Rick Deyulio, who pulls the various components together. Using an iPhone, Griswold records segments from home and sends audio via email. The show sounds a bit different, because parts of it aren’t recorded in a studio. But Griswold’s voice sounds strong.

“I think ‘Blue Moon’ has worked because it’s in the right time slot,’’ Griswold said. “It’s not going to work at 1 o’clock in the afternoon. But on a Sunday morning, it works. It’s a labor of love. It still is a labor of love for me.’’

Her penciled-in playlists are posted on the “Blue Moon Café” Facebook page each week and fans weigh in. “‘Blue Moon Café’” is the only radio I listen to these days,’’ wrote one. “It wasn’t the same without you. So glad you’re back.’’

“Great show, Mimi,’’ added another. “It’s not just that you play John Prine, but the sound of your voice makes life better somehow. Thanks for the tunes.’’

The show and the enthusiastic response it generates keeps Griswold going. So does the thought of her grandchildren, who are so close yet so far away. She is eager to reconnect with them, go on outings and help them with their schoolwork.

This year, Griswold is determined to be more involved with activities around the house. She loves to garden and said her husband plans to add some raised beds to make it easier for her. She also would like to be more hands-on with her passion project, Queen V’s Bees. The Griswold family raises honeybees and harvests honey a couple times a year. The frames that hold the honey are heavy and take two hands to lift, Griswold said — one more reason to keep working to strengthen her left arm.

“I want to do everything, everything I possibly can,’’ Griswold said.

Griswold to be Inducted into NYS Broadcasters Hall of Fame

Ed Levine is rooting for Mimi Griswold’s continued recovery from stroke and for life to resume some normalcy so she can hug and spend time in person with her family and grandchildren, perhaps return to the studio for “Blue Moon Cafe’’ (though remote is working well) and hopefully travel to New York City this fall for her induction into the New York State Broadcasters Association Hall of Fame.

Griswold, now retired after a long career as a radio programming executive, is a member of the 2020 class of honorees and is scheduled to be inducted in late October. If the ceremony can be held, Levine will present Griswold her award. He emcees the event each year. Last year’s event was postponed until this year, and time will tell if people can gather for it.

Levine is the president and chief executive officer of Galaxy Media Partners, a media, marketing and events company that owns and operates more than a dozen radio stations in Central New York, including TK99, home of Griswold’s “Blue Moon Cafe.’’ He founded the company more than 30 years ago and was Griswold’s boss for much of that time.

Griswold was selected for the honor for her radio programming prowess. There were times, Levine said, that she juggled multiple markets and stations — and made it look easy. One of the reasons she was selected, he said, is because it’s not all that common for women to hold upper-management roles in radio.

“She was one of the pioneers,’’ Levine said. “There are a lot of women in sales and a lot of women on the air, but there haven’t been that many women in charge of what comes out over the radio and with that responsibility of running a group of radio stations.”

“She kind of poo-poos that, but she did everything except sell commercials to advertisers,’’ Levine added. “She’s not just the woman on Sunday mornings who does ‘Blue Moon Cafe.’”

Mimi Griswold at a Glance

Favorite musical artist:“There’s so much I like, but Bruce Springsteen is probably my favorite artist of all time.”

Currently reading: “Robbing the Bees: A Biography of Honey, the Sweet Liquid Gold That Seduced the World,’’ by Holley Bishop. (The book is a celebration of bees and their produce. Griswold is a beekeeper.)

Favorite destinations: Cape Cod and anywhere in the Adirondacks. “I’ll travel anywhere,’’ Griswold said. “My dream trip is to travel across Canada by train.’’