Is it ever ethical to lie? I guess the textbook answer is “no,” but, in reality, we lie all the time.

We gloss over the majority of these lies by convincing ourselves that they fall into the “little white lie” category. These are instances where we assure ourselves that we are lying for a good cause.

For example, your spouse tries a new dish which took her several hours to prepare — just for you. It’s disgusting. When she asks how do you like it, do you tell the truth, do you lie or do you use a euphemism — “This was really different” — hoping that she doesn’t catch on?

Is it OK to tell a little white lie to spare a friend’s feelings? When my spouse, who packed on a few pounds, asked whether she looked fat, should I have told her the truth? (I didn’t.) Should you lie when asked about past encounters with the opposite sex prior to your marriage or a serious relationship? 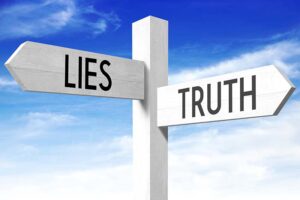 Philosopher Charles Fried says that lying is always wrong, because it shows disrespect for the person to whom we are lying. Others, however, do not find it as clear-cut. They view the intent of the lie in determining how harmful it might be. Lying to a family member who will be the honoree of a surprise birthday party, is perfectly acceptable, most believe.

A man wrote to advice columnist Amy Alkon recently to lament that he was asked by a female friend to objectively rate her looks on a scale of from 1 to 10. He said his friend has a very high opinion of her looks, but she stressed to him that she wanted the unvarnished truth.

Taking her at her word, the guy rated her between a 5.5 and 6. Big mistake! Predictably, she sent him a text and said she is cutting him out of her life. He was mystified by her action, especially since she insisted on the truth.

Alkon responded that this is the classic “gotcha” question. “Always lie,” she advised. Well, she added, if you are held at gunpoint or threatened with disembowelment with a steak knife or rusty pliers, still lie.

Alkon admits that her advice is at odds with the black-and-white notion of honesty and deception that is seared into our brains at an early age.

My mother warned me that if I lied, my nose would grow like Pinocchio’s, or my pants might spontaneously catch on fire.

I remember the first time I told my mother a lie. When I was about 6 years old, I had taken a half-dollar from the baby carriage of her friend who had come to visit. When the friend discovered the money was missing, I quickly became the prime suspect. My mother asked me several times whether I took it. I insisted I didn’t.

My mother’s perfect logic noted that there were just four of us in the room — my mother, her friend, the friend’s 18-month-old child and me. Finally, after more prodding, I confessed, produced the coin and burst into tears. I can’t remember what all of the punishment consisted of, but I assure you that it had an impact on my backside.

Most people look upon “little white lies” as acceptable behavior. If they don’t harm anyone, what’s the problem? Telling mom that her broccoli was really tasty when you hate broccoli, telling your husband that he looks great in that god-awful tie, or telling a friend who wanted to get together with you that you had a previous commitment when you didn’t — these are all examples of OK little white lies.

These are known as “prosocial” lies, according to Alkon. They mislead, but they also benefit the person we’re lying to. One might refer to it as “benevolent deception.”

I remember when I was 10 years old, my mother and I were visiting a friend whose 6-year-old granddaughter was there. She began babbling on about Christmas and all of the stuff that Santa Claus was going to bring her.

Since I had recently found the truth about the Santa caper, the now older and wiser I would show this misguided child the error of her beliefs. “You fool,” I told her, “there is no Santa Claus.” Her demeanor changed as if she had been struck by a Mack truck. She let out a wail, which brought her grandmother and my mother rushing to see what had befallen this unfortunate child.

When the girl told them what I had said, my mother shot me a look that could have brought forth the demons from hell. When we got home, she administered corrective measures for my intemperate disclosure.

I was confused and reminded her that she always told me to tell the truth. That is the instant that I learned about prosocial lies. She told me I should have said nothing or gone along with the girl’s fantasy about Santa.

Learning from the Santa caper, when my then-8-eight-year-old granddaughter, confronted me with the dreaded “Is Santa Claus real?’’ question, I dodged the pitfall and referred her to her parents. Let them be the bearers of bad news, or let them get off the hook as best they can, I reasoned.

My 57-year-old son recently reminded me of something I had forgotten. When he approached me with his skepticism of Santa Claus, I told him Kris Kringle had been a real person, and even if the toys were delivered by loved ones, the spirit of Christmas walks the face of the earth, and that is the really important message.

Teaching a course in communication ethics for SUNY Oswego for many years, I always prodded my students to think about lying as unethical behavior. We frequently discussed whether the so-called little white lies should be in a different category.

We all tell little white lies. Innocent stuff. Like the last one I told. I was running late for an appointment and called the person I was meeting to say I was on my way, when, in fact, I had not even left home yet.

A lie? Technically, yes. Did it hurt anyone? Probably not, but here I am fretting about it, because my mother’s famous motto is ringing in my ears — “Your word is your bond.”