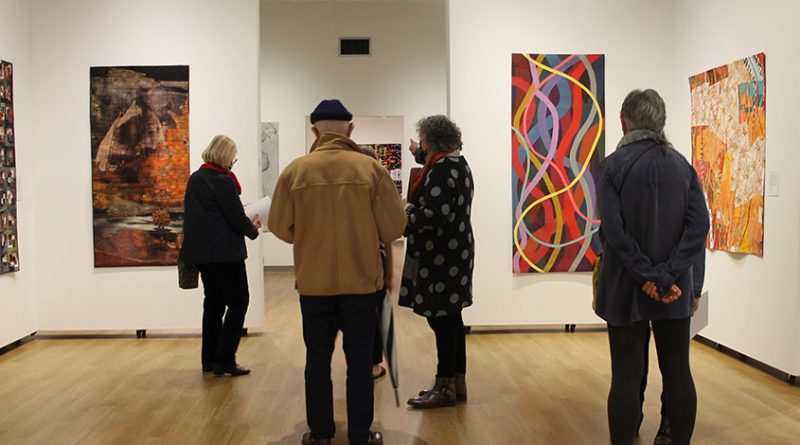 The main gallery at the Schweinfurth Memorial Art Center in Auburn is an explosion of color and creativity, the perfect way to brighten up a cold and dreary Central New York winter day.

The “Quilts=Arts=Quilts” annual exhibit, marking its 40th year at the Schweinfurth, showcases more than 70 quilts created by 61 artists from across the world, from Syracuse and its eastern suburbs to Europe and Australia. Being a juried show, these in the exhibit were selected from the more than 300 entries that had been submitted.

The title of the exhibit is a comment on how quilts are viewed, according to Donna Lamb, the director of the art center. 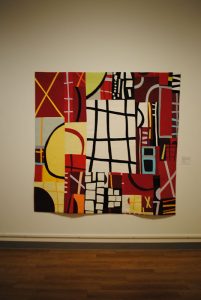 When the exhibit first opened in 1981, she explained, it was mostly traditional quilts. Over the past four decades, it’s grown from there to “be primarily innovative or what we call art quilts.”

For those who only imagine quilts as bedcovers, this exhibit will surely alter that thinking.

When visitors “come to this show, they have an image in their mind of what a quilt show is going to be like, and many people are pleasantly surprised,” said Lamb.

It has opened up the definition of quilt, with some of the quilts shaped as opposed to the typical rectangle or square and some have three-dimensional elements, she noted.

Take, for example, the acrobatic figure in mid-flight, in the piece titled “Ryan Stephenson” by Canadian Fuzzy Mall, which measures 10-1/2 feet high. Or the bright “Kimono #3 Winds Flowing for Charity” by another Canadian, Lynne Lee; or “Heritage,” by Lena Meszaros from France. Her quilt is in the shape of coat, with a suitcase and boxes dangling below.

While “Heritage” represents a shaped quilt, it, like so many quilts, tells a story. 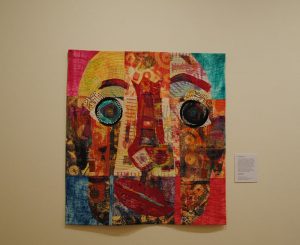 According to a media release from the center, the piece represents Meszaros’ family’s nomadic life in Europe. Her father, a Jew of Polish origin, survived World War II in a ghetto in Budapest, Hungary. Her mother had lived in Siberia before marrying him and moving to Hungary. According to the artist, a coat is the most practical item when you have to leave your house. It can protect you from the weather, she had said, can serve as a blanket, and you can put food in the pockets and can hide valuables in its lining.

Canadian Bill Stearman began his quilt, “Finding Comfort in the Unknown,” just weeks before treatment on his liver. In his artist statement, he said that he was so filled with emotions; he “needed to find a way to be rid of all of that and to focus on finding comfort. Making this piece brought comfort and it continues to bring me comfort as I settle in with its softness.” Today Stearman is cancer-free.

The exhibit also boasts quilts that represent issues in today’s society, especially since the pieces need to have been completed within the past three years, said Davana Robedee, program director. One of those topics is the COVID-19 pandemic and its effect on people.

Kathy Suprenant, of Kansas, had been a cellular and molecular biologist and professor at the University of Kansas. Her piece, titled “CELL-fie,” is from three lab coats with different textures. It features drawn and stitched cells and DNA strands in shades of blue. In her artist statement, she noted that “Months of COVID-19 isolation led to a disorienting array of drawing, painting and stitching directly onto the quilt surface.”

Quilts often respond to what the current political climate is, Lamb said.

“It’s a way to send out messages that are quietly accepted and not challenged. There’s something about the medium that is not as threatening for people,” she said.

In the artist statement for her “Dora Creek: Twenty-Eight Sketches,” Australian Judy Hooworth explained “sometimes it is the small-scale aspects of the surrounding bush that captures her attention … the complexity and diversity of fragile ecosystems threatened by urban encroachment.”

Closer to home, Rachel Ivy Clarke of Syracuse wrote that her “What Is Essential Is Invisible to the Eye” shows professions that are “consistently ignored, under-resourced and scorned, yet arguably essential to a functional society.” 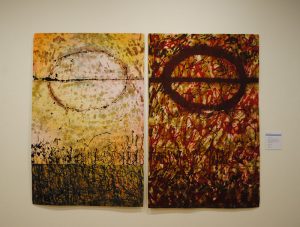 Two other local quilters with works displayed are Liz Anderson, of Fayetteville, with “Sweetie Pie Guy” and Julia Graziano, of Manlius, with “Don’t Cross Me.”

The quilt movement has also seen changes in the quilters and the techniques they use have changed.

One of the biggest changes in the last 20 years is that quilters are designing or printing their own fabric, Lamb said. Robedee pointed out that within the last five years, many are digitally designing their fabric.

Traditionally, quilting has been done by women and while the majority of the pieces displayed have been created by women, there are several created by men.

Kevin Womack of Virginia won Best in Show for his “Equilibrium.”

For Lamb, a quilter herself, the exhibit allows her to appreciate all of the work that goes into these pieces, and Robedee loves the deep and very rich history behind the tradition of quilting.

“It represents a lot of different facets of America. In its craft form and in its fine art form, it sort of tells a story about us as a people,” she said. 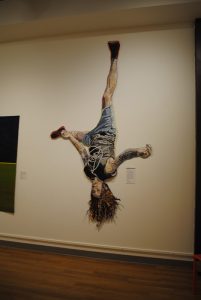 In the Davis Family Gallery on Schweinfurth’s second floor is an exhibit titled “Marks Made,” featuring the work of Christine Mauersberger.

The exhibit closes Jan. 9. Admission is $10 per person; members, participating artists, and children 12 and younger are admitted free.

For those interested in history, the art center has partnered with the Cayuga Museum of History & Art next door to offer a $15 joint admission ticket that offers a $5 savings. The center is open Wednesdays through Saturdays, 10 a.m. to 5 p.m. and Sundays, 1 to 5 p.m. They will be closed Christmas Eve day, Christmas Day, New Year’s Eve and New Year’s Day.

For more information, check out www.schweinfurthartcenter.org.

If traveling to Auburn, visitors might consider also taking in some of the historical landmarks in the area, including the Equal Rights Heritage Center; the home of William H. Seward, a leading politician of the 19th century who spearheaded the purchase of the Alaskan Territory in the 1867; and the Harriet Tubman National Historical Park.