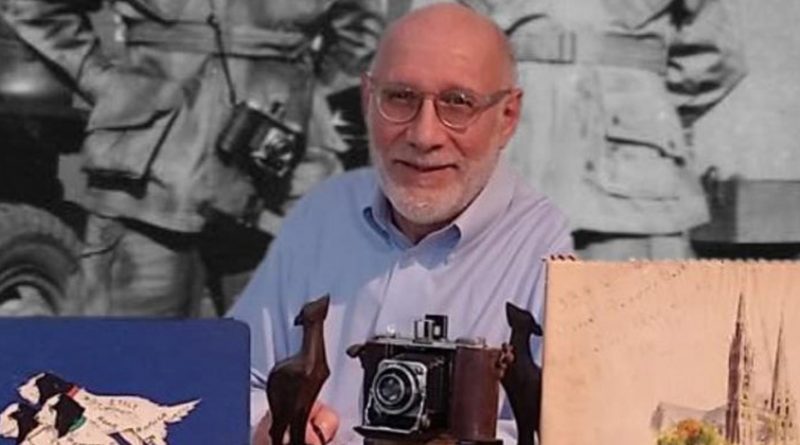 Mike Chamberlain, 65, is a native of Central New York, now living in Auburn. His father, Sgt. Carl, was a paratrooper in World War II, serving from late 1942 to 1945. Carl Chamberlain would have turned 100 this past July.

As a volunteer in the 504th Parachute Infantry Regiment (82nd Airborne), he was deployed to North Africa (1943), and “did combat jumps during the invasions of Sicily, Italy and southern France,” Chamberlain said. “He also saw combat during the battles at Alta Villa, Mount Sammucro, Anzio and Battle of the Bulge.”

After the fall of Rome, he was reassigned to the 334th Division and was part of the invasion of southern France. His unit supported the 7th Army’s pursuit of the German army up the Rhone valley to the Battle of the Bulge. He was discharged at the conclusion of the European hostilities in the fall of 1945. He returned to Central New York that October.

Although his father’s service wasn’t that different than other GIs’, Chamberlain said, what set his time in uniform apart was that he carried a camera with him.

The result is that Chamberlain has more than 900 photos from his father’s time in uniform.

“While there wasn’t time for snapping photos during combat, his photos document army life, the people, cities and countryside that soldiers encountered in Italy and France as well as scenes of the aftermath of war,” he explained.

The photos provide a unique and personal perspective on ‘life in uniform’ during war time.

On Sept. 21, his collection of photos was delivered to the Library of Congress for archiving as part of its Veterans History Project.

The Veterans History Project was created by Congress in 2000 as part of the American Folklife Center at the Library of Congress to “collect, preserve, and make accessible the firsthand accounts of American war veterans so that researchers and future generations may better understand the realities of war.”

“A donation-accession ceremony, recognizing the donation of my father’s photograph collection, along with his letters and other documents, will take place at the Library of Congress in Washington DC,” Chamberlain said. “According to my contacts at the VHP, this is one of the largest photo collections ever donated to the Veterans History Project. We will be delivering the photos and papers to the VHP at that time.”

He said he wants to highlight the VHP.

As one of the only institutions dedicated to capturing the personal stories of U.S. wartime veterans, the Library of Congress’ VHP serves as one of the few repositories for individual veteran’s stories, letters, photos and papers, he pointed out. Currently, the VHP houses the stories, letters and documents from more than 110,000 veterans.

While most of the World War II veterans have now died, there is an entire new generation of aging vets, especially those from Vietnam, whose stories are worth hearing and saving before they too are gone, he said.

Before the age of smartphones, most serving in uniform didn’t carry cameras. So the vast majority of the VHP collection is the oral histories of wartime veterans.

The value of these oral histories was evident in the recent resurgence in interest in the “code girls” and the untold story of the American women code breakers during World War II.

Liza Mundy, author of the 2017 New York Times best-seller on this topic, cited the 40 oral histories she accessed from the VHP collection as an important source for her book. The story of these code girls was also the subject of an episode of the “American Experience” program on PBS.

“My sense is that the donation-accession ceremony for a Central New York World War II vet would serve as newsworthy event and an opportunity to talk about the VHP through the lens of my father’s World War II experience and our journey to find a permanent home for his photographs and papers,” Chamberlain explained.

These materials can be accessed at www.loc.gov/vet.

Information on how to donate materials is also available from the website.